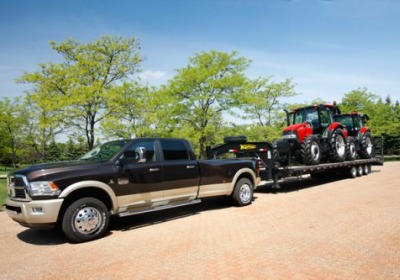 No one can accuse Ram of backing away from the full-size truck arms race. Chrysler has officially dropped the payload details on its 2013 Ram Heavy Duty, and the 3500 now packs a maximum trailer weight of 30,000 pounds. Chew on that number for a moment. That's 15 tons, or the equivalent of a dozen Mazda MX-5 Miata convertibles stacked on a trailer, and it's also a whopping 6,900 pounds more than the closest competitor to the Ram 3500, the Chevrolet Silverado 3500 HD. Ram engineers have cranked the truck's 6.7-liter Cummins turbo-diesel engine to a ludicrous 850 pound-feet of torque, up 50 lb-ft over the 2012 model. "Shock the world" figures, all.

Throw in a stiffer frame, stouter transfer case, beefed-up transmission and brawnier U-joints in the driveline, and you have what Ram is calling "the most capable trucks we've ever built." That includes the Ram 2500, which has seen its towing capacity swell to 18,350 lbs and its Gross Combined Weight Rating jump to 25,000 lbs. Look for the 2013 Ram 3500 HD to bow at the 2013 Detroit Auto Show, and be sure to check out the full press release below for more information.

Ram to Build Most Capable Trucks Ever

In the quest to build the most capable trucks available, Ram officially released class-leading towing and weight ratings for its 2013 line of Ram Heavy Duty pickups and Chassis Cab trucks.

Ram's closest competitor is limited to a 23,100-pound maximum trailer.

The Ram 3500's Gross Combined Weight Rating (GCWR) -- which is defined by the maximum combined weight of the truck, payload and trailer -- has been raised to 37,600 pounds, which again far surpasses the closest competitor's 30,500-pound GCWR.

Ram has increased the capability in its other truck models as well.

Ram Heavy Duty adds a number of new features for 2013, including a factory-integrated fifth-wheel and gooseneck hitch mount, a 17,000-pound Class V hitch with 1,800 pounds of tongue weight, class-exclusive electronic stability control (ESC) for dual-rear-wheels and a new Center High-Mounted Stop Light (CHMSL) –positioned camera, the first of its kind in the heavy-duty pickup category, to provide a full view of the bed for easier hook-up of fifth-wheel or gooseneck trailers as well as monitoring cargo.

Ram is also introducing an industry-exclusive Ram Active Air intake system. When the intake system senses extreme heat, it draws cooler air from the front of the vehicle – a function that also engages at high altitudes for superior throttle response in low oxygen environments. When conditions are wet from snow, ice or water-fording, the system pulls air from an under-hood inlet, clear from snow packing and water.

To handle the best-in-class towing capability of the new Ram Heavy Duty, a new front and rear suspension system with advanced geometry builds upon the chassis improvements and greatly improves overall roll stiffness. An advanced three-link front suspension on the Ram 3500 is necessary for the vehicle's higher GVWR and for use with heavy front loads, including snow plows. Additionally, a newly designed Hotchkiss leaf spring rear suspension on the Ram 3500 offers improved ride and handling while delivering higher towing and payload capability.