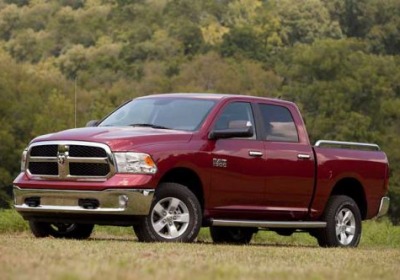 Auto writers around the country tend to specialize in different vehicles based on the trends of our respective home markets. The New England Motor Press Association, for example, presents an award every year for the best winter vehicle. With that in mind, it is fitting that the Texas Auto Writers Association doles out an annual truck award. This year, the TAWA "Truck of Texas" is the 2013 Ram 1500.

In a announcement from TAWA, the new Ram took top honors based in no small part on, "a new 3.6-liter V6 that boasts 42 percent more power, improved fuel economy, infotainment upgrades and available eight-speed automatic transmission and air suspension." And according to Ram CEO Fred Diaz, "Automotive reporters have reacted extremely favorably to the new 2013 Ram 1500, and our research tells us that resonates with truck buyers." The Ram 1500 unseated the previous Truck of Texas, the 2012 Ford F-150.

The Texas Auto Writers Association Truck Rodeo was also an occasion for journalists to award an SUV of Texas, and thankfully, the distinction is made between SUV and CUV. The Jeep Grand Cherokee took top honors in the SUV department, with TAWA pointing to models like the off-road-ready Trailhawk and feature-laden Overland Summit. It is the third consecutive year that the Grand Cherokee has achieved this accolade. The award for top crossover went to the 2013 Buick Enclave, which is in its first year of a new design. To read more on the Truck of Texas award and all the finalists, check out the press release below.

"Automotive reporters have reacted extremely favorably to the new 2013 Ram 1500, and our research tells us that resonates with truck buyers," said Fred Diaz, president and CEO of Ram.

"Texas is Ram's biggest market and we've worked relentlessly to build powerful trucks with best-in-class fuel economy and capability for our customers," said Diaz, a favorite son of San Antonio. "The pickup market is fiercely competitive and we are proud the Texas Auto Writers have awarded Ram trucks with these coveted titles."

"We are absolutely delighted that Jeep has won the prestigious 'SUV of Texas' award three straight years," said Mike Manley, Jeep's president and CEO. "Even more impressive is the fact that Jeep vehicles came out on top in every category we entered. We are grateful that the influential Texas auto writers have once again recognized the unmatched combination of benchmark capability and outstanding everyday driving dynamics that Jeep vehicles offer.

"Texas is a tremendously important SUV market and we have proven that winning TAWA awards increases showroom traffic and increases sales. Through September of this year, Jeep brand sales are up 20 percent nationally, and nearly double that in Texas."

Buick's 2013 Enclave was crowned 'CUV of Texas' while the 'Truck Line of Texas' went to Ram trucks.

Award winners were selected by the members of the association using a Borda election method whereby the results were determined using points assigned to members' first, second and third choices based on the number of entries for a particular category.Thisconsensus-based electoral system more accurately represents the opinions of the members of TAWA.

"There are really no losers in this event," said Michael Herzing, president of TAWA. "The big winners are the consumers of Texas, the No. 1 state in the nation for trucks and sport utility vehicles."

The other winning vehicles, by category: