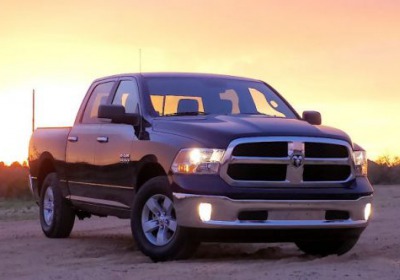 Not long ago, the efforts of an automaker to put a six-cylinder engine into a pickup truck went something like this: take the basic bread-and-butter V8, lop two cylinders off one end of the block and call it a day. The resulting engines were generally pretty rough around the edges, and while they were able to churn out reasonable amounts of torque, they generally weren't good at anything else. Instead of being smooth running, they shook and shimmied; in place of a quiet highway jaunt, they operated well outside their low-rpm comfort zones and sent a corresponding racket throughout the cabin. And, instead of returning significantly superior fuel economy over their V8 counterparts, they guzzled gas and spat noxious vapors out their tailpipes.

In other words, the only reason to choose the base V6 engine over an optional V8 was to save money on the initial purchase, and that usually meant you'd be driving home in a stripped-out machine and would be lucky to have power windows, cruise control and air conditioning.

Those days are long gone, and good riddance, we say. Today's lineup of full-size trucks are better in every way than ever before, from styling and safety to towing and overall performance. And, for the first time ever, fuel efficiency is a primary selling point for V6-powered pickups. But how does a new, modern-day truck with a V6 engine work in the real world? Does it deliver on the promises of decent efficiency, refined driving manners and adequate performance (both around town and when put to work) all for a palatable price? We spent back-to-back weeks with two 2013 Ram 1500 pickups to find out, one with a Hemi V8 and one with a 3.6-liter Pentastar V6. Read on, faithful truck buyers.


First, a quick history lesson. When the Ram first hit the marketplace in 1981, the base engine was a 225-cubic-inch (3.7-liter) slant-six that offered up 95 horsepower and 170 pound-feet of torque. That straight-six engine was replaced in 1988 with a 3.9-liter V6 that upped the power quotient to 125 ponies, which was further upgraded to Magnum status in 1992, bringing along 180 horsepower. All of these powerplants were proper truck engines – they made a bunch of torque right off idle and didn't like revving past their low-rpm power peaks. All of this was good news for people who did work with their trucks, but it didn't do any favors for highway driveability or fuel economy.


The 3.6-liter Pentastar V6 in the 2013 Ram goes about its business with the majority of its grunt coming higher up in the rev range.

A big improvement in everyday driving performance came in 2002 when Chrysler's corporate 3.7-liter V6 mill made it into the engine bay of the Ram. That engine served base Ram customers well enough until 2012, but even then, its 215 hp and 235 lb-ft were only really sufficient for relatively light-duty applications. Unlike past base Ram engines, the 3.7 acted more like a car engine, remaining mostly flat until the needle on the tach soared past 3,000 rpm, hitting its peak power at 5,200.

The 3.6-liter Pentastar V6 in the 2013 Ram 1500 goes about its business in a similar manner, with the majority of its grunt coming higher up in the rev range – this kind of performance is common in modern engines that are optimized for power and efficiency. Thing is, it's not ideal for pickup trucks, which require strong pulling power down low, as close to idle as possible.


That's a lot more giddyup and go, especially for a fullsize truck.

And here's where the rest of the drivetrain comes into play. Hooked up to the V6 engine is an excellent new transmission, with a total of eight forward ratios to play with. The old V6 was paired with a positively ancient four-speed automatic. But this new TorqueFlite 8 transmission – some supplied by ZF and some built by Chrysler under license – works beautifully in this application. Compared to the transmissions Ram used to use, the new eight-speed sends more torque to the wheels using numerically lower gearing while still offering overdrive in the last two gears.

Basically, this means that the V6-powered Ram 1500 feels like it has plenty of power, either to tow loads with or to practice your burnouts while accelerating to highway speed, while still managing EPA-estimated fuel economy figures of 17 miles per gallon city and 25 highway. Adding four-wheel drive lowers those figures to 16/23, which is still very good for a fullsize truck with this sort of capability.

Demonstrating just how impressive this engine and transmission combination feels on the road is the good-ol' 0-60 measurement. The 2013 Ram V6 sprints to the magic figure in a claimed 7.5 seconds, which makes it an astonishing three seconds quicker than the 2012 model with the old 3.7-liter engine. Put more simply, that's a lot more giddyup and go, especially for a fullsize truck.

For 2013, the Pentastar-powered Ram 1500 can be had with four doors and four-wheel drive. Our test machine was a V6-powered four-door model equipped with the SLT package, but was not a 4x4. We weren't able to test the full 4,350-pound towing capability, but predictably had no trouble whatsoever moving five passengers along with a few hundred pounds in the bed on a few occasions. When the going gets tough, use the manual gearshift buttons on the right side of the steering wheel to keep the engine in its upper-rpm sweet spot and we suspect the six-pot Ram will tow your boat gently to the stream just fine.

Perhaps it goes without saying, but Ram's big 5.7-liter Hemi V8 engine, with 395 horsepower and 410 pound-feet of torque, has no trouble at all pulling loads. Max trailer-towing capability is rated at 10,450 pounds. In the 2013-model-year truck we tested, Ram was using a six-speed automatic transmission, which generally offered seamless operation and went about its business unnoticed. For 2014, the excellent eight-speed ZF, as seen in the 2013 V6 Ram, makes its debut with the V8 as well. We're eager to test out that combination, not to mention the newly available 3.0-liter diesel in the 2014 Ram 1500.


We suspect the six-pot Ram will tow your boat gently to the stream just fine.

Besides the powertrain, there are some other notable improvements to the 2013 Ram 1500 worth mentioning. Exterior looks haven't changed much, but some stampings, such as the massive hood, are now made from aluminum instead of steel to save weight. Ram also made some changes underneath the skin to improve an already top-shelf frame and suspension setup. The truckmaker has been using coil springs front and rear for a number of years, with a multi-link arrangement in the rear that provides superior ride and handling over the traditional leaf springs of previous Ram trucks. For 2013, there's a new, optional "Active Level" air-ride suspension system that allows the driver to raise and lower the truck as necessary, with up to 10.7 inches of maximum ground clearance (default mode offers 8.7 inches). The truck also automatically lowers at highway speeds for improved aerodynamics.

Inside the cabin, buyers are treated to one of the nicest interiors ever put into a pickup truck. Nearly every surface uses attractive plastics and rubbers, most of them covered by soft padding, which is nice, but what's really appreciated are the excellent ergonomics and overall usability of the switchgear, gauges and storage compartments. Everything the driver needs is within easy reach, without the need to lean forward or make other awkward reaching motions, which is something that can't be said for all fullsize trucks. There are three massive cupholders along with a generous bin that can swallow anything from a laptop computer to power tools. Or, if you need the room inside, it can seat six passengers with a bench seat up front when properly equipped.


Buyers will be treated to one of the nicest interiors ever put into a pickup truck.

The new rotary shift knob may not be everyone's cup of tea, but we like it. Not only is the dial compact enough so that it doesn't take up too much space in the dash, it's also clearly labeled and more intuitive to use than some other electronic gear selectors, including the T-handle shifters used in other eight-speed Chrysler products. The shift dial also removes the necessity of a old-style column-mounted bar, which can sometimes get in the way of other controls. There are optional Uconnect touchscreen infotainment systems that we highly recommend – the 8.4-inch screen looks most appropriate in the center stack, as opposed to the smaller, five-inch Uconnect, and we've long been fans of the simple user interface used by Chrysler to control things like climate, audio and navigation settings. Redundant dials are also available if you prefer not to use the touchscreen.

Due to the truck's stiff chassis and coil spring suspension setup, it rides rather well, both unencumbered with just the driver and a passenger, or loaded down with a ton of stuff out back. We tested a Hemi-powered model with the optional air suspension, and it does indeed keep everything level in the face of a full truck bed, but we were also pleased with the smooth feel of the standard suspension.


20-inch rims are available on some trim levels, if that kind of thing is your bag, baby.

Steering is another strong suit of the 2013 Ram 1500. Gone is the old energy-sapping hydraulic-assisted unit of past years in favor of a new fully electronic system. In passenger cars, we often moan about a lack of steering feel when these systems are used, but in a fullsize truck application, the slight numbness and over-assisted feeling isn't too bothersome, as we're well aware that we're piloting a 5,000-plus-pound vehicle with extremely limited sporting intent, and we'll take every added ounce of fuel efficiency we can muster. In any case, the 17-inch wheels with 265-series tires track straight and true; much larger 20-inch rims are available on some trim levels, if that kind of thing is your bag, baby.

Stopping power feels more than adequate with no load in the bed or trailer attached, and the 13.2-inch rotors with dual-piston calipers up front and 13.8-inch rear discs with single pistons are sized and spec'd appropriately for heavier loads. Braking modulation is good, and we appreciated the pedal feel, which doesn't have excessively long travel.


We walked away impressed with Chrysler's light-duty pickup.

After a week with a Hemi-powered Ram and another week with a V6-powered Ram, we walked away impressed with Chrysler's light-duty pickup. Whether you want maximum efficiency along with the ability to carry big loads from Home Depot or a truck that's capable of pulling the entire Home Depot store off its foundations, Ram has both needs covered.

Our overall opinion can be summed us thusly: if you really need to tow huge loads on a regular basis – say, once a week or so – you should probably throw all your eggs in the Hemi's sizable basket and drive as economically as you can the rest of the time. If, however, you tow more occasionally – say, once or twice a month – and your trailering needs don't require you to crest three tons, we think you'll find plenty to like in the V6-powered Ram 1500. And if you can wait just a little bit longer, we have a good feeling about a certain light-duty diesel that's about to hit the market for 2014...