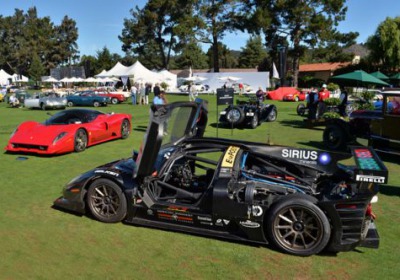 Pebble Beach is an outstanding event if you're interested in pre-war classics, but outside of the parking lots, it's a bit light on more modern stuff. The Quail, now in its eleventh year, leans far more towards the present day, and has become one of the must-attend events of the Monterey car week.

Like Pebble, though, it's a highly exclusive affair, with triple-digit ticket prices that usually sell out at the same rate as a Justin Bieber concert. If you're one of the lucky few to hold a pass, though, you'll be rubbing elbows with a who's who of the auto world. One of the highlights of this year's event was the appearance of one Michael Schumacher, who showed up alongside one of his Formula 1 cars. A retrospective was also held on Lamborghini's 50 years of production, as well as another celebration of Aston Martin's centennial. There was also a tribute to the late Martin Swig, one of the co-founders of the California Mille, who passed away last year.

The cars, not surprisingly, were epic. Lamborghini, Pagani, Spyker, Rolls-Royce, BMW, McLaren, Bugatti and Galpin Ford all showed new models to the public for the first time, while there were also appearances by Jim Glickenhaus and his Ferrari P4/5 and P4/5 Competizione, marking the first time the coach-built masterpiece and its racing offspring were shown together. Finally, the Petersen Museum showed off its wears, including the late Steve McQueen's gorgeous Jaguar XK-SS.

We have plenty of live images from The Quail in the high-res gallery above. Be sure to take a look.