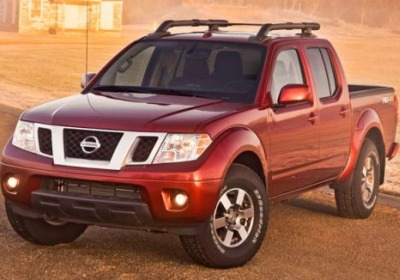 With the competition dwindling (or dying) among compact trucks, Nissan is looking to make some minor changes to the 2013 Frontier to snag a few extra sales for its aging pickup. Pricing and fuel economy are probably two of the most important vehicle stats among new-car buyers, and the 2013 Nissan Frontier has made vast improvements in both areas over the 2012 model.

First things first: The MSRP of both the King Cab and Crew Cab models have dropped by $1,270 with new starting prices of $17,990 and $22,030 (*not including the $845 destination charge), respectively. The biggest price drop is seen on the SV Crew Cab 4x2, which dropped $1,450 to its new price of $23,990. The important thing here is that the 2013 Frontier King Cab is now priced just a few hundred dollars more than a regular cab version of the Toyota Tacoma. Nissan is also offering a new SV Value Truck Package that includes all the equipment of the previous SV Premium Utility Package (spray-on bedliner, Utili-Track in-bed cargo system with four adjustable cleats and Bluetooth) and adds in a rearview monitor and dual-zone air conditioning.

Another key change made for 2013 was to the Frontier's fuel economy. Except for the base-model truck (King Cab, inline-four, manual transmission, two-wheel drive), all other configurations have seen increases in city and/or highway fuel economy to the tune of one or two miles per gallon; the biggest improvement was to the V6 models with the automatic transmission, which saw an improvement of one mpg city and two mpg highway. Nissan accomplished this with better aerodynamics and updated internal engine components to reduce friction. Aero changes include a seal between the cab and bed, a tailgate spoiler and a new front chin spoiler. For more details on the 2013 Frontier – including a full pricing breakdown – scroll down for the official press release.

Other notable changes for 2013 include the return of the Desert Runner model, which is priced at $23,760 USD for the King Cab and $25,010 USD for the Crew Cab model. The Desert Runner provides an off-road look and equipment such as Bilstein® off-road performance shock absorbers but in a 4x2 package.

Other enhancements include revised PRO-4X content, including the addition of RearView Monitor, Rear Sonar System and upgraded audio. The previous SV Premium Utility Package is now the SV Value Truck Package and includes new content such as RearView Monitor and Dual Zone Air Conditioning. The SV Value Truck Package is priced at a savings of $700 USD for the King Cab and $650 USD for the Crew Cab versus the price of the items if sold separately (package comes standard on all SV models with manual transmission). Three new exterior colors are also offered across the 2013 Frontier lineup.

Fuel economy for most 2013 Frontier models has increased one-to-two miles per gallon due to reduced engine friction and enhanced aerodynamics. For example, a tailgate spoiler is added to all models.

MSRPs* for the 2013 Nissan Frontier Crew Cab include:

About the 2013 Nissan Frontier
The Nissan Frontier, which combines premium hardware, extraordinary power and off-road athleticism, continues to be a leader in the mid-size truck segment.

For 2013, Frontier again offers an exceptional level of on- and off-road performance with the use of a 4.0-liter DOHC V6 engine rated at 261 horsepower and 281 lb-ft of torque. A 152-horsepower 2.5-liter inline 4-cylinder engine is also available (King Cab only). With its strong performance, combined with good fuel mileage (19 city, 23 highway, I4 King Cab 2WD M/T), the Frontier is a fitting truck for work or play.

Fuel economy for most 2013 Frontier models has increased one-to-two miles per gallon due to reduced engine friction and enhanced aerodynamics. A seal has been added between the cab and bed, the front spoiler has been extended and rear tire wind deflections and a new tailgate spoiler have been added.

About Nissan North America
In North America, Nissan's operations include automotive styling, design, engineering, consumer and corporate financing, sales and marketing, distribution and manufacturing. Nissan is dedicated to improving the environment under the Nissan Green Program 2010 and has been recognized as a 2010 and 2011 ENERGY STAR® Partner of the Year by the U.S Environmental Protection Agency.
More information about Nissan in North America and the complete line of Nissan and Infiniti vehicles can be found online at www.NissanUSA.com and www.Infiniti.com.

With a strong commitment to developing exciting and innovative products for all, Nissan delivers a comprehensive range of fuel-efficient and low-emissions vehicles under the Nissan and Infiniti brands. A pioneer in zero emission mobility, Nissan made history with the introduction of the Nissan LEAF, the first affordable, mass-market, pure-electric vehicle and winner of numerous international accolades including the prestigious 2011 European Car of the Year award.

For more information on our products, services and commitment to Sustainable Mobility, visit our website at http://www.nissan-global.com/EN/.

About Nissan
Nissan Motor Co., Ltd., Japan's second-largest automotive company, is headquartered in Yokohama, Japan, and is part of the Renault-Nissan Alliance. Operating with more than 248,000 employees globally, Nissan provided customers with more than 4.8 million vehicles in 2011, generating revenue of 9.4 trillion yen ($118.95 billion US). With a strong commitment to developing exciting and innovative products for all, Nissan delivers a comprehensive range of 64 models under the Nissan and Infiniti brands. A pioneer in zero-emission mobility, Nissan made history with the introduction of the Nissan LEAF, the first affordable, mass-market, pure-electric vehicle and winner of numerous international accolades, including the prestigious 2011-2012 Car of the Year Japan and 2011 World Car of the Year awards.