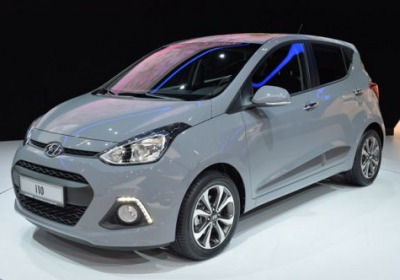 Hyundai strutted its tiny but fashionable i10 onto the Frankfurt floor today, showing off the new, second-generation city car to the assembled media. The i10 was originally unveiled in August, although at the time, we didn't have much info on powertrains or other items.

Europe, where the i10 will be sold, gets a pair of gas-powered engines from Hyundai's Kappa family, displacing 998cc and 1.25 liters, respectively. The smaller, three-cylinder engine is limited to just 65 horsepower and 69 pound-feet of torque. It's also available with an LPG option, which adds one hp at the cost of three lb-ft of torque. Opt for the 1.25-liter, four-cylinder mill and you'll get a positively reckless 85 horsepower and 88 pound-feet of torque. Both engines are available with the driver's choice of a five-speed stick or a four-speed automatic.

Lack of thrust aside, can we all agree that the i10 is a sharp looking city car? It's compact dimensions belie a reasonable amount of cabin space, all in a wrapper of the stylish, fluid lines that Hyundai is known for. We'd argue it looks even better in these pictures than it did the first time we saw it. Hop up top for our live images from Frankfurt, or scroll down to the bottom for an official press release and images from Hyundai. The company's European arm as also assembled quite a number of Q&A style videos about the new car, for your edification.

Longer, wider and lower, with class-leading space and practicality
Craftsmanship, equipment and safety features from the segment above
Two engine line-up for Europe: 1,0- and 1,25 litre gasoline units

10 September 2013 - Hyundai Motor is set to build on its success achieved in the A-segment with the New Generation i10, a model designed, engineered and manufactured in Europe, for European buyers. The new model features youthful, sculpted styling, a high quality interior and levels of equipment and safety features typically found only in segments above.

Allan Rushforth, Senior Vice President and Chief Operating Officer, Hyundai Motor Europe, commented: "New Generation i10 is a significant step forward for the brand and will ensure Hyundai Motor remains a leader in the highly-competitive A-segment by introducing more customers to what Hyundai Motor is all about: delivering value beyond expectations."

European design
New Generation i10 is a true European car – it was designed and engineered from the ground up at Hyundai Motor's European R&D centre, HME TC, at Rüsselsheim, Germany, for European buyers.

The importance of design to the success of New Generation i10 was not underestimated by Hyundai Motor; design is currently the number one reason European customers choose to buy a Hyundai Motor in any segment, with 31% citing it as their primary purchase consideration (versus an industry average of 29%). New Generation i10 offers European consumers the latest interpretation of the company's fluidic sculpture design philosophy.

In early customer clinics conducted in Italy and the UK, New Generation i10 received the best spontaneous reaction from participants versus its key segment rivals.

Increased dimensions
The injection of European style is matched to practicality-enhancing dimensions. At 3665 millimetres (mm), New Generation i10 is 80 mm longer than its predecessor, and one of the longests cars in the segment. Likewise, New Generation i10 goes from being the narrowest model in the A-segment to the widest at 1660 mm (+ 65 mm).

A 40 mm lowered roofline, now standing at 1500 mm, yields an athletic on-the–road stance. This is complemented by the sleek proportions of the bodyshell, in turn highlighted by the sharper belt line and side belt moulding.

New Generation i10 has one of the most practical and spacious cabins in the sector. Innovative interior packaging gives way to segment-best trunk volume (252 litres with rear seats in place – a 27-litre increase over its predecessor – and 1046 litres with rear seats folded) and combined front and rear legroom (1890 mm).

Comfort and convenience
The bodyshell of New Generation i10 is stiffer, thanks to the use of high-tensile steel, tailored blanks, reinforcing loops and additional bracing, with torsional rigidity increased by 27% over its predecessor. High-tensile steel forms 29,2% of the body structure of New Generation i10 – a huge increase over the 9% utilised in Original i10. The firm underpinnings not only improve the car's impact-resistance, but yield significant improvements in noise, vibration and harshness (NVH). In addition to other NVH improvements, New Generation i10's noise levels are recorded as low as 38 decibels (dB) at idle and 65 dB at highway speed – noticeably below those of key rivals.

Safety
Safety is a top priority for Hyundai Motor and New Generation i10 benefits from the latest technologies, including several from the segment above, to make it one of the safest vehicles in its segment. A range of active and passive safety features ensure maximum protection for occupants and pedestrians alike.

Active safety features such as electronic stability control (ESC) and vehicle stability management (VSM) are fitted as standard for the first time on an A-segment Hyundai Motor vehicle, as is a tyre pressure monitoring system.

Quality assured
Demonstrating Hyundai Motor's confidence in its European build quality, the New Generation i10 will come with the company's Five Year Unlimited Mileage Warranty. The industry-best package also includes five years of roadside assistance and five years of vehicle health checks – which are offered across Europe for the first time on an A-segment Hyundai model.