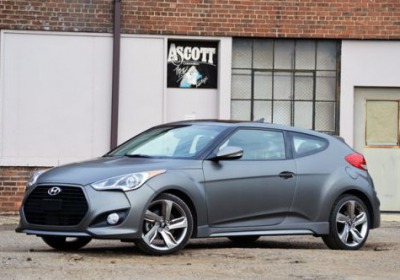 If you've been reading the past several updates on our long-term 2013 Hyundai Veloster Turbo, you may have noticed a trend developing. This is a flawed vehicle. Not critically so, but for many of our editors, this vehicle's annoying attributes are indeed outweighing the good. What may not be obvious, though, is that the deck is kind of stacked against the Turbo model.

See, a Veloster with its base powertrain and less of the gimmicky, look-at-me styling is a solid, fashion-forward, nicely packaged hatchback at a good price. Our issues haven't so much been with the Veloster itself, but with the unfulfilled expectations of hot-hatchery that the Turbo brings to the equation.

For this update, then, I will focus on a common bridge between the two Veloster models: the cars' top-end infotainment systems. Tack on the Style and Tech packs on the standard Veloster or the Ultimate Package on a Veloster Turbo, and you'll get the same Blue Link infotainment system, touchscreen navigation and eight-speaker Dimension stereo (a standard item on the VT).


The Veloster adds a pair of cool tech items to its arsenal thanks to Pandora integration and the Blue Link service.

The system's capabilities run the gamut from boring to mundane, though that isn't necessarily a bad thing. Hyundai played it conservative when organizing the infotainment controls around the seven-inch touchscreen. To the left of the screen are the start points for accessing the terrestrial radio, media systems and XM Satellite Radio. On the bottom are the knobs for volume and tuning, along with the phone, info/setup button, and the rocker button for changing tracks. On the right, we have the navigation controls.

While you start with these buttons, the vast majority of interactions happen on the screen, a seven-inch interface that quickly responds to inputs, has clear graphics, and is fairly straightforward to use. The Veloster adds a pair of cool tech items to its arsenal thanks to Pandora integration and the Blue Link service.

Pandora works about as well as it does on your smartphone. You can thumbs-up or thumbs-down tracks and access the mercilessly small number of skips afforded by the radio service (six per hour, per station).

Hyundai's Blue Link service incorporates a full suite of functionality. It's one of the latest in the stream of smartphone apps that allows owners to take control of their vehicles, with features as simple as remote locking and unlocking to remote starting (which is only available on cars with an automatic transmission). Blue Link expands on the simpler features, though, by offering owners the ability to search for points of interest on their smartphones and send them to the vehicle, allowing easy access through the navigation system.


By and large, the Veloster's infotainment systems work pretty well.

By and large, the Veloster's infotainment systems work pretty well. My relationship with the Dimension stereo, though, was hit or miss. The eight-speaker, 450-watt system features an eight-inch subwoofer, but I had trouble getting the kind of sound I expected of a stereo with these numbers.

The FM stations lacked depth, although this could probably be chalked up to the lack of HD radio. The service is becoming so prevalent, particularly in new cars, that it's a bit of shock to the system when a vehicle doesn't have it. While I think that's excusable, what baffled me was the poor audio quality while streaming over Bluetooth.

Bluetooth streaming sounded just as hollow, only deeper, bass-heavy songs were accompanied by static. The best way I can explain: it's like the sound that you get when you plug in an iPod to a pair of cheap speakers through an auxiliary cord, and then turn the iPod's volume all the way up – the results can be blown out and fuzzy. In the Veloster Turbo, this left me leaning on a direct link between my iPhone and the car.


With a direct link, the audio quality was richer, with deeper bass and clearer sound overall.

With a direct link, the audio quality was richer, with deeper bass and clearer sound overall. The system responded well whether I was using the iPhone's default music player or a web-based service like Spotify. My main concern with using Spotify, though, was that I couldn't change the song through the car. For some reason, trying to change tracks on either the steering-wheel controls or the center-stack buttons only fast-forwarded the song a few seconds. To change tracks, I had to physically pick up the phone and hit the next song on there. Not a huge issue, but kind of an annoying idiosyncrasy.

I'm not enamored by the driving experience with the Veloster Turbo, but from a tech standpoint, it's a very solid entry with a suite of options that are just starting to trickle down to the more affordable segments of the marketplace. I see a big contender for Blue Link coming with Chevrolet's MyLink and Toyota's Entune, both of which boast a wider number of apps for accessing music and other web-based services. Still, for those that are enthusiasts of connected motoring, the Veloster offers a complete, affordable package.

See also: Hyundai i20 WRC gets shakedown in Finland, Hyundai, Kia and U of M studying 'highway hypnosis', What a strike in Korea could mean for US Hyundai and Kia buyers.