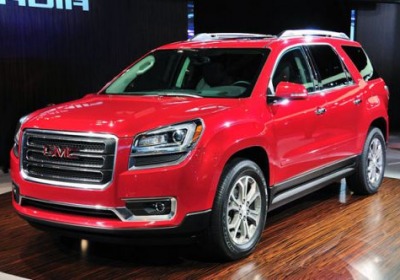 For those who are interested in the reworked 2013 GMC Acadia, we now know how much you can look forward to forking over. Base MSRP for the 2013 version of the full-size, three-row crossover has been set at $34,875 (*not including a $825 destination charge). If you are interested in the range-topping Denali trim, be prepared to pay $46,770.

The 2013 Acadia will come standard with a backup camera, leather-wrapped steering wheel, USB port and recycled visuals from the now-dead Saturn Outlook.

Upping to the Denali trim gets you a head-up display, blind spot monitoring system and GMC's new Rear Cross Traffic Alert system. According to GMC, most trims will also receive IntelliLink connectivity as standard equipment. The Acadia will also get the industry's first front-center airbag, an innovation it shares with other Lambda-based crossovers like the refreshed 2013 Buick Enclave. The idea behind the new tube-shaped airbag is that it can provide a buffer between driver and front seat passenger in the event of an impact, or better hold the driver in place if he or she is alone.

The Acadia will continue to be powered by GM's ubiquitous direct-injected 3.6-liter V6, making 288 horsepower and 279 pound feet of torque. With standard front-wheel drive, the Acadia returns 17 miles per gallon city and 24 highway. Opting for all-wheel-drive docks just one mile per gallon from both ratings. For more information on the updated 2013 Acadia, check out the press release below.

DETROIT – The 2013 GMC Acadia three-row crossover SUV launches this fall with a suggested retail price of $34,875, including a destination charge of $825. The upscale Denali trim – originally added to Acadia for the 2011 model year – will return with a long list of standard equipment for $46,770, including destination.

Acadia is a segment leader in retained value, defined as the projected residual value of a vehicle after five years of ownership. Both Edmunds.com and ALG have named the 2012 Acadia to their respective lists of the industry's residual value leaders.

GMC has manufactured trucks since 1902, and is one of the industry's healthiest brands. Innovation and engineering excellence is built into all GMC vehicles and the brand is evolving to offer more fuel-efficient trucks and crossovers, including the Terrain small SUV and Acadia crossover. GMC is the only manufacturer to offer three full-size hybrid trucks with the Yukon, Yukon Denali SUVs and the Sierra pickup. The Sierra Heavy Duty pickups are the most capable and powerful trucks in the market. Details on all GMC models are available at http://www.gmc.com/, on Twitter at @thisisgmc or at http://www.facebook.com/gmc.