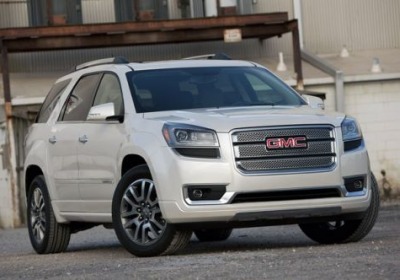 I'm probably ill-suited to accurately and fairly take the full measure of a vehicle like the 2013 GMC Acadia Denali. This is a machine conjured around the express notion of corralling and then herding a brood of rafter-swinging hatchlings to and fro in relative comfort, and with no such passel of wee Bowmans to call my own, it's difficult to give this rig a fair shake. While I can certainly weigh cargo capacity, legroom and fuel economy stats with the best of them, I'd be lying to your face if I said the word "crossover" didn't urge some uncontrollable Pavlovian recoil from the murky recesses of my frame. To put it simply, I just can't stand the damn things.

As a rule, the segment is built on a bed of compromise. Manufacturers love nothing more than to spin up a tired yarn about the virtues of this particular neck of the market. We're told the crossbreeds deliver all the ride quality, driving dynamics and fuel economy of a car married with the seating position, capability and interior volume of the SUV set. That all sounds as swell as a sunset, but as the 2013 Acadia Denali so artfully illustrates, the advertising on the box is rarely congruous with the prize inside. Even with an imaginary squad of younglings at my heels, the refreshed luxury crossover doesn't quite manage to scratch the promised itches.


A more upright nose helps give the Acadia a masculine appearance for the first time.

GMC gave the 2013 Acadia Denali a full refresh for 2013, and while the rear three-fourths of the vehicle may look awfully familiar to Saturn Outlook owners, the front fascia delivers a substantial improvement over the outgoing plastics. A more upright nose helps give the Acadia a masculine appearance for the first time, and the change is more than welcome. We doubt most buyers will be able to draw parallels between this new Acadia and the long-dead Saturn unless the two are situated door-to-door in a parking lot, and the squared off fender arches, blacked-out D-pillars and forward-leaning C-pillars look right at home on the luxury GMC. While we'd normally consider giving General Motors grief for recycling old stampings, the maneuver is plenty smart.

The Denali trim earned this tester a set of 20-inch aluminum wheels and a chrome roof rack, but designers have done a fairly smart job of keeping the shiny in check. The old model's over-the-top grille and lower valance treatments have been swapped with hardware that actually manages to show some restraint, and the result is a much more attractive vehicle outside.


There's still plenty of hard plastic to be found inside the cabin, complete with bad graining and sharp casting lines.

But, like the big crossover's Buick Enclave and Chevrolet Traverse siblings, the Acadia has always fallen short of the mark indoors. GMC hobbled the previous generation Acadia with cheap-feeling materials, and we're sad to say the new model isn't out to change that scenario. Ladle on the Denali badge with its associated price tag, and the 2013 Acadia Denali's cabin is an underachiever on the best of days. While the dash now struts a new soft-touch covering, there's still plenty of hard plastic to be found inside, complete with bad graining and sharp casting lines. It's the kind of display I wouldn't be keen to forgive on a budget B-segment ride, and it's even less acceptable on a $51,805 crossover.

Engineers have done plenty of work to update the center stack, though I can't say I'm thrilled to see a new array of capacitive-touch controls replace the old buttons. The new kit looks far better than the old setup, but, as is so often the case with the tech, usability has taken a hit. Small lettering does little to help the situation, resulting in plenty of missed controls, and the fact that the screen is situated low in the center console means viewing navigation instructions can be a dangerous, distracting proposition.


That back bench isn't some marketing ploy. You can easily stick two full-grown adults back there.

For all those complaints, it's difficult to find an argument against the vast amount of space in Acadia Denali. As with before, the crossover continues to deliver excellent leg- and headroom, even in the way-back third row. That back bench isn't some marketing ploy. You can easily stick two full-grown adults back there for jaunts of under an hour without complaints, and three kids should be able to comfortably occupy the space for even longer if need be. That is, if you can talk someone into climbing up into the rear and through the jungle gym of captain's chairs to get to the back seat. Ingress and egress remains a struggle.

Even with all three rows up and working, there's still a solid 24.1 cubic feet of cargo area. Anyone who needs more space can start flipping down seats for a maximum of 116.1 cubes, or roughly enough area to launch a small but successful miniature pony ranch.

GMC has seen fit to leave well enough alone when it comes to the 2013 Acadia's drivetrain, and buyers familiar with the previous iteration will find a familiar 3.6-liter V6 under the hood. The 288-horsepower six-cylinder provides adequate acceleration with its 270 pound-feet of torque, but the engine has to be worked to get this 4,857-pound pig up and moving. The added burden of this tester's all-wheel drive system does suck some of the wind out of the V6's sails, but it will move along if you're willing to swing the tachometer to the deep end and keep it there.


I managed an unimpressive 16 mpg combined over the course of a week laden with nothing more than my lonely self.

Then there's the vehicle's fuel economy. Even by leaving cruise control to work its magic on the highway and puttering around town, I managed an unimpressive 16 miles per gallon combined over the course of a week laden with nothing more than my lonely self. While that's within spitting distance of the Environmental Protection Agency estimate of 16 mpg city and 23 mpg highway, it puts the Acadia in foul company. For comparison's sake, the Chevrolet Suburban sees 15 mpg city and 21 mpg highway from a 5.3-liter V8 engine, and that machine offers a towing capacity that handily paddles this crossover's backside.

It's around this juncture that Acadia fans typically begin bellyaching about how much better the crossbreed rides and drives compared to the poster child for big, body-on-frame SUVs. I'll be the first to admit that the Acadia and its twin sisters, the Traverse and Enclave, deliver a comfortable cruise over long distances, soaking up broken pavement and expansion joints in the very image of contentment. But stray beyond straight-line driving and the Acadia doesn't offer anything special to the poor soul stuck behind the wheel.


The Acadia Denali operates like a less functional version of the world's least-inspired minivan.

I don't expect to have some cone-clipping tarmac carnivore at my command when I'm at the tiller of something with three rows, but the Acadia Denali operates like a less functional version of the world's least-inspired minivan. The steering is detached and the brakes feel barely up to bringing the big crossover down from speed. In every way, the 2013 GMC Acadia Denali is the driving clone of its predecessor.

Crossovers are meant to offer buyers a no-compromise package wherein drivers are offered all of the benefits of both the SUV and minivan sets, but as with the previous generation, the 2013 Acadia is a machine mired in shortcomings. While comfortable, it offers all of the fuel economy and agility of your favorite body-on-frame leviathan along with the awkward and clumsy passenger ingress and egress of those old dinosaurs. And I think that's my biggest hitch here. The Acadia and its sister ships are clearly built and marketed to buyers who just can't bring themselves to accept that what they really need is an honest minivan.

Make no mistake, $50,000 will fetch you a van with an infinitely nicer interior, better fuel economy and more comfortable seating. No matter how hard I tried, I couldn't option up a Nissan Quest, Honda Odyssey or Toyota Sienna to anywhere near the Acadia Denali's MSRP. Buy the minivan, save the cash and use it to pay for therapy to bolster your self-confidence if you must.