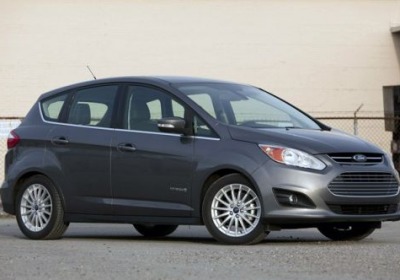 As much as we enthusiasts like to rail on the lowly Toyota Prius as the harbinger of death for all we hold dear, there's no denying the machine's absolute and interminable grip on the hybrid market in the United States. Toyota has so thoroughly sunk its teeth into the segment that you can clearly hear the automaker's incisors clacking against one another with the conclusion of each financial quarter. And there's little wonder why. Buyers can plop down less than $25,000 and have a runabout that can return up to an estimated 51 miles per gallon in the city, leaving every other entry on the market with precious little gristle to gnaw on.

Enter the 2013 Ford C-Max Hybrid. With its claimed 47 mpg combined, the funky little hatch from Europe already falls behind the 48 mpg city offered by the Prius, but that marginal sacrifice in fuel economy could be a small price to pay for buyers who want a credible alternative to the stalwart Toyota. Unfortunately, like the Fusion Hybrid, the C-Max Hybrid had trouble even approaching its Environmental Protection Agency estimates during our time with the car.


It hasn't lost any of its weirdness in the translation from European people mover to North American subcompact.

Outside, Ford has grafted its corporate nose onto a plucky little two-box shape. With its short wheelbase and cavernous headroom inside, the C-Max Hybrid can't help but look more than a bit inflated, lurking somewhere between hatchback and minivan forms, though the 17-inch wheels on this machine help take some of the bloat out of the vehicle's appearance. The C-Max certainly hasn't lost any of its weirdness in the translation from European people mover to North American subcompact, but the Aston Martin-esque lower grille and swept headlights help the machine look fairly attractive up front. Around back, hexagonal taillamps help distinguish the C-Max as a Ford product, and the large hatch hints at an easy time loading or unloading cargo.

The C-Max does offer an attractive and comfortable cabin with a familiar, contoured steering wheel laden with various redundant controls. Occupants up front are treated to decently bolstered and comfortable front seats with contrast stitching, though the swept center stack does impede on knee room a bit.

As with other Ford products equipped with MyFord Touch, the C-Max Hybrid boasts a sharp instrument cluster with two small LCD screens set to either side of the speedometer. The screens can be configured to display a variety of information ranging from fuel economy and trip data to climate control and radio settings.

Fortunately, the C-Max Hybrid doesn't rely solely on the touchscreen to control audio and climate settings. Ford has given buyers honest buttons and dials for quick manipulation of both, which means the driver can circumvent MyFord Touch at his or her discretion. We probably don't need to expound on how much that setup means to some of us.


Fold the back bench down and cargo capacity jumps to 52.6 cubes, handily besting the base Prius.

The back seat offers serviceable space for full-grown adults, thanks in no small part to that epic headroom. There's 39.4 inches of room for Sputnik-sized craniums even in the back, and with 24.5 cubic-feet of cargo area behind the second row, the C-Max Hybrid brings plenty of utility to the table. Fold the back bench down and that number jumps to 52.6 cubes, handily besting the base Prius. Line the C-Max Hybrid up against the bigger and more similar-looking Prius V, however, and the Ford falters badly, with the larger Toyota delivering 67.3 cu-ft of cargo room with the second row folded. The C-Max also suffers from a fairly tall rear floor, which means loading heavy cargo takes a bit more effort than we'd like.

The C-Max Hybrid does offer up solid acceleration thanks to a 2.0-liter Atkinson-cycle four-cylinder engine and AC synchronous electric motor combination. The internal combustion mill is good for 141 horsepower and 129 pound-feet of torque, though adding in the electric motor ups the final tally to 188 ponies. That's enough to get the 3,640-pound hybrid down the road without being a traffic obstruction. The run to 60 miles per hour takes less than 10 seconds, which is more than adequate for daily driving.

On the highway, the hatchback is quiet enough for long-distance travel, and the fact that the driveline can seamlessly drop into an EV mode at speeds of up to 62 miles per hour is fantastic. Jump off the four lane and head for hill country and the C-Max delivers decent steering, though the vehicle's regenerative brakes aren't exactly what we'd call progressive. When a manufacturer figures out how to build a hybrid with decent stoppers, we'll make sure they get a sizable gift basket in thanks. Go for the brakes in the C-Max and it's as if the car can't decide how much brake force to serve up at any given time. The result is what feels like an unpredictable stopping distance.

And what of that 47-mpg combined rating? Over our week with the C-Max Hybrid, the hatchback managed to yield a disappointing average of 35.6 mpg with a peak of 40.6 mpg. As with the Fusion Hybrid, the averages we recorded are a country mile from factory estimates. Yes, our week with the car fell in February, but temperatures ranged from the mid 40s to low 50s, and while apologists will point to winter fuel blends and cooler temperatures as the culprits behind the lackluster fuel economy, we can tell you none of the other hybrids we tested over the winter suffered a 14-percent drop in performance. Owners themselves report similar numbers, with Fuelly.com – a site that lets owners track their fuel economy and displays the aggregate as an average – showing a 38.8-mpg average for the C-Max.

Ford offers the C-Max Hybrid in two trims: SE starting at $25,200 and SEL, which kindly asks $28,365, excluding a $795 delivery fee, for a set of keys. Our particular C-Max Hybrid, an SEL with navigation, power liftgate and rearview camera, weighed in at $31,210 with that destination charge. That price is within reach of a comparably equipped Prius or Prius V, but we can't say the C-Max Hybrid is so much better than either of those offerings that it offsets the disappointing fuel economy and is worth a buyer's wad of cash.

Could it be that Ford built both the C-Max Hybrid and the Fusion Hybrid not with the goal of outselling either the Prius or the Camry Hybrid, but rather in an attempt to bolster its Corporate Average Fuel Economy rating? A pair of EPA-estimated 47-mpg models would certainly do just that, even if real-world performance falls well under the tested average.