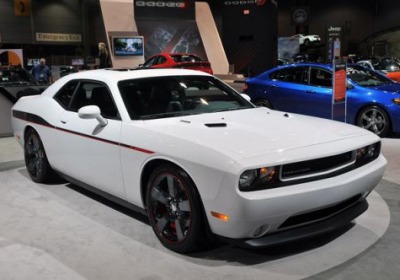 Dodge has added a bit of spice to its Hemi-powered Challenger for 2013, offering up this new Redline package that makes its official debut at the Chicago Auto Show. The R/T Redline builds on the Rallye Redline kit that was created for the V6 Challenger, and we like how these subtle changes add to the muscle coupe's already classic styling.

In addition to the black chrome 20-inch wheels with red accents, the R/T Redline adds subtle graphics along the beltline. Inside, cars equipped with the six-speed manual transmission get a performance tuned exhaust that allows the engine to send a full 375 horsepower and 410 pound-feet of torque to the rear wheels. (Redline Challengers with the five-speed automatic produce 372 hp and 400 lb-ft.)

The Redline package retails for $1,995 and can be had on both Challenger R/T and R/T Plus models. Scroll down for the full press blast.

- The 2013 Dodge Challenger R/T Redline Group will be available this spring on R/T and R/T Plus models at a tremendous value with starting U.S. Manufacturer's Suggested Retail Price (MSRP) of just $1,995 building off America's Most Affordable V-8 Muscle Car

While ice cold winter weather sweeps across Lake Shore Drive, the Dodge brand heats up the 2013 Chicago Auto Show by building on Challenger's red-hot record selling year, and now at the show, the introduction of the new Challenger R/T Redline with modern muscle-car cues, a potent HEMI V-8 engine throwing down 375 horsepower and a performance-tuned chassis for world-class dynamics - this new Challenger delivers exactly what Dodge fans want.

The new 2013 Dodge Challenger R/T Redline builds on the success of the 305 horsepower V-6 Challenger Rallye Redline model that arrived in the middle of the 2012 model year.

Following Dodge Challenger's signature A-line bodyside character line, an all-new two-color Redline Red and Graphite stripe runs from behind the front wheel arches to the tail. For a distinctive look, the rear-quarter section of the stripe features the "Redline" name in Red over Graphite color scheme. For a distinctive look, the R/T Redline features a body-color grille surround.

HEMI Power
For the performance enthusiast, the 2013 Dodge Challenger R/T Redline features the legendary 5.7-liter HEMI® V-8 engine that delivers up to 375 horsepower and 410 lb.-ft. of torque and gets up to 25 miles per gallon (mpg) on the highway. When paired with the track-proven Tremec TR6060 six-speed manual transmission, the Dodge Challenger R/T delivers smooth shifts, while delivering even more power through unique performance-tuned dual exhaust and under-floor mufflers with low-restriction bottle resonators. The result, 0-60 mph runs in the low-5-second range and a sinister exhaust growl for the cars left in its rear-view mirror; a trademark of the original Challenger HEMI from more than 43 years ago.

The 5.7-liter HEMI® V-8 engine is also available with a five-speed automatic transmission producing 372 horsepower and 400 lb.-ft. of torque. In addition, this version of the engine includes Chrysler Group's innovative Fuel Saver Technology to seamlessly transition to high-fuel-economy four-cylinder mode when less power is needed and V-8 mode when more power is in demand. And for even more control, steering-wheel mounted paddle shifters with "sport mode" transmission calibration are included.

Just in time for spring
The 2013 Dodge Challenger with R/T Redline Group is available for ordering now and arrives at dealerships this April with a U.S. MSRP of $1,995. When configured on the Challenger R/T or R/T Plus models, the MSRPs are $31,990 and $33,990 respectively (both prices exclude $995 destination).

See also: 2013 Dodge Challenger R/T Redline revs into Chicago, Mopar '13 Dart will roll into Chicago next week, Chrysler earns $1.7B in 2012, revises product plans for US.