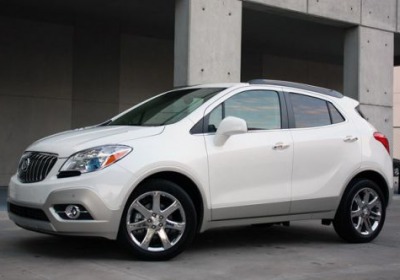 We admit it. We have no earthly idea how this whole thing is going to shake out.

Typically, after driving a new car or truck, we come away prepared to hazard a guess as to whether said model has a good chance of being a sales success. We've amassed enough time watching the industry, scrutinizing the competitors, and so on, to make a reasonably educated bet. Yet here we are, days removed from driving the new 2013 Buick Encore, and we still have no bloody idea.

To be fair, we're in good company. Buick's perfectly capable public relations and marketing teams don't appear to entirely know what to expect from the Encore, either. They've had to strain to even find remote competitors to match their new baby against. BMW X1? Volkswagen Tiguan? Mini Countryman? All kinda-sorta-maybe rivals from our vantage point. Yet we can't necessarily provide better ones for this tiny semi-premium crossover, either. Fiscal cliff-discount Land Rover Range Rover Evoque? Uppity Hyundai Tucson? Nissan Juke ravished by Vilner? It's really rather hard to say what plays here. The above panoply of would-be rivals only hints at just how small the Encore is. At 168.5 inches long, it's the shortest Buick in memory – stubbier, remarkably, than such past Trishield outliers as the Skyhawk, Somerset and Reatta.

Yet none of this size discussion or the lack of a clearly defined competitive set is to say that the Encore won't be a resounding success. Early signs from dealers – whose initial orders have been six times company estimates – are more than positive, and certainly Buick could do with another crossover underneath its much larger Enclave.

Back to the size thing for a moment. Seeing the Encore away from the bright lights of its 2012 Detroit Auto Show reveal and on the street improved our initial impressions. When seen in its proper element, the city, the Encore's scale and proportions start to make a lot more sense, and standard 18-inch alloys do wonders for its presence. Even so, there's no doubt that traditional Buick hallmarks like the Encore's waterfall grille and hood-mounted Ventiports simply look better on larger-scale canvases. There's a faint whiff of children's dress-up here – the baby of the family wearing mom or dad's jewelry, trying to act all grown up. Making a form this small look upscale is no easy task, however, and Buick's stylists have done an admirable job overall.

The same goes for the interior, which, at least in full-house spec with optional niceties like leather and navigation, certainly looks the part. Oh, we could debate the merits of the glassy faux wood trim, the occasionally hokey-looking iconography on the seven-inch Intellilink infotainment screen and Buick's continued obsession with a carpet of center stack buttons, but overall, it's a comfortable, upscale place to be, particularly in our tester's saddle motif. In fact, allow us to take a moment to underline "comfortable" – the packaging here is pretty impressive. Despite being sandwiched in between a 100.5-inch wheelbase, we found plenty of space up front, with the power height-adjustable seats affording dining-chair like height and a surprisingly commanding view without grazing the headliner. The back seat is a bit narrow, but more accommodating than one might think – we even had an occasion where we had four full-size adults riding in relative comfort for a while.

Buick still has the market cornered on quiet.

Buick still has the market cornered on quiet – it has stuffed a ton of sound deadening in the Encore's nether reaches, added an acoustic-laminated windshield and thicker-than-normal side glass, along with a sound-absorbing headliner and whispering low-rolling resistance Continental rubber to keep things tranquil. Going one step beyond, the Encore also receives standard Bose Active Noise Cancellation, essentially a white noise generator that relies on three headliner-mounted microphones to detect and counter interior din. This is Buick's first application of the technology, but General Motors has employed ANC previously on the Chevrolet Equinox. Make no mistake, this isn't an indulgently scaled luxury sedan or SUV, but it's still a very civilized place in which to weather one's morning commute.

Forward visibility is good, and the aforementioned seat height helps the driver to see eye-to-eye with larger crossovers, furthering the illusion that the Encore is larger than it is. Rear visibility is less convincing, with thick C-pillars and a smallish rear window crimping one's view. At least there's a standard rearview camera, along with 10 airbags if you still fail to see something.

This Buick shares little beyond powertrain and seat frames with the Chevy Sonic.

It's at this point in the program where the driving enthusiasts among you will probably want to tap out. Said plainly, while competent, this is not an entertaining vehicle to drive. Buick should offer no apologies for this reality, however – it's not the Encore's raison d'être. This cute ute's sole powertrain is the same 1.4-liter Ecotec turbocharged four cylinder found in the Chevrolet Sonic economy car. In truth, the two vehicles are only tangentially related, with the budget Bowtie riding atop GM's Gamma architecture and the Encore relying on the Gamma II underpinnings it shares with its twins the Opel/Vauxhall Mokka and Chevrolet Trax. The Sonic and the Encore don't actually share much underskin material, notes James Danahy, chief engineer on the Encore program. In fact, Danahy was quick to clarify that this Buick shares little beyond powertrain and seat frames with the Chevy, though "learnings" on things like crash energy dissipation have informed this crossover's development.

Like it is in the 2,700-pound Sonic, the 1.4 turbo is tuned to deliver 138 horsepower at 4,900 rpm and 148 pound-feet of torque at 1,850 rpm. While that's enough to make the humble Sonic a fun car, it's not exactly a groundswell of muscle for the heavier Encore, which starts at 3,190 pounds for a front-drive model like our tester. Informal acceleration runs on our part generated a best 0-60 time of 10.0 seconds with two aboard – we're guessing the official time will end up being somewhere in the high nines. More ominously, colleagues from other outlets reported 12-second times with three people and a bit of gear aboard an all-wheel-drive example. In either case, that means you'll be staring at the taillights of every other vehicle we've mentioned to this point – if indeed you're lucky enough to even see the taillights of the far costlier X1 at all; BMW says a base sDrive28i will do the job in 6.2 seconds (and it's usually conservative with its numbers). For further reference, the cheaper Hyundai Tucson will do the deed in about eight seconds. You're as likely as not to be in a dead heat with that hipster driving a Nissan Cube in the next lane. The Encore is not quick, friends.

Thank goodness it's smooth, then. The six-speed Hydramatic is an agreeable partner, and there's even a bit of innovation happening in the $1,500 optional Active-On-Demand AWD system. Unlike most such systems that funnel torque to the wheels when slippage is detected, AOD uses a magnetically actuated clutch to pre-load the rear wheels with torque at every stop, automatically disengaging if no loss of traction is detected. The Borg Warner-developed system is said to be lighter and quicker acting than traditional AWD setups. With 6.2 inches of ground clearance front and rear, the Encore won't be up for much more than the occasional muddy field or curb hopping, but that's probably all that will ever be asked of it.

We disembarked from the Encore's seemingly native habitat, Atlanta's posh Centennial Park outdoor mall, negotiated area traffic and headed out on the highway, intent on sampling Georgia's network of beautiful rolling country roads. Once up to speed on the superslab, the Encore was again pleasingly hushed in the Grand Buick Tradition, but merging onto the freeway and passing with any measure of authority required dropping down a cog or two, bringing with it the unmistakable auditory intrusion of four-cylinder strain. We weren't really put off by the Encore's highway comportment (in all honesty, it rides very well considering its short wheelbase), but we were less thrilled when it came to those bucolic two lanes. There are lots of hills in north central Georgia, and burdened by the Encore's luxury lashings, the Ecotec just ain't country strong. Combine a lack of power with this CUV's stubby dimensions, high center of gravity and precise-but-unengaging electric power steering, and there wasn't much incentive to press on.

As a leather-lined metropolitan runabout, the Encore makes a lot of sense.

The Encore is just plain happier in urban settings, where its tight turning circle (just 36.7 feet) and tidy footprint make it a standout in the parking wars and dicing it up in traffic. The front MacPherson strut / rear torsion beam suspension is adept at smothering manhole covers and potholes, and at 18.8 cubic feet, the cargo hold is surprisingly generous for holding the day's shoppings (and that's before folding the rear seats for a total of 48.4 cubes). As a leather-lined metropolitan runabout, the South Korean-built Encore makes a lot of sense – its power deficit isn't as apparent in a stop-and-go world, and the upside of its smallish powertrain is thrift – EPA estimates for the front-drive model sit at 25 miles per gallon city and 33 highway, for a combined rating of 28 mpg. AWD models fall to 23/30/26.

At the end of the day, we're left with a smartly accoutered and serene little shoe of a crossover that offers good daily manners for urban living. Buick may not have the clearest idea of what vehicles the Encore lines up against, but it does seem to have target customers in mind – buyers on both ends of life's timeline who are mutually unencumbered by kids and their associated detritus. Young, childless professionals on one end and empty nesters on the other. This sounds just about right to us. With a starting price of $24,950 (including destination), the Encore stickers far below its (supposed) rival from BMW, priced more in line with larger but less premium-minded offerings from Volkswagen and Hyundai. Whether Buick's white space approach turns out to be this model's masterstroke or its undoing will be interesting to watch, but after spending a day's drive getting to know the Encore, we wouldn't bet against it.