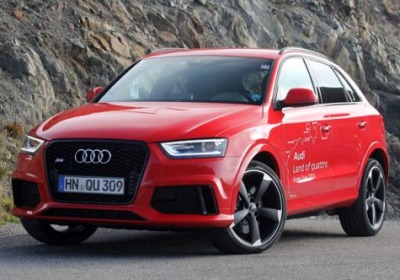 The year 1994 was a really good year for German performance fans, because it was that year when Audi released its very first official RS model (for "RennSport," or racing sport), the RS2 Avant. Recently, I was invited to participate in a three-day leg of the Audi Land of Quattro Alpen Tour, a blatant flaunting over hill and dale of the company's current lineup of RS models. We hit Austria, Switzerland and Italy – the roads were epic and the weather held for this exquisite boondoggle.

Our chief focus on this tour, which included the RS6 Avant and RS7, was the newcomer RS Q3 small crossover that will absolutely never be coming to North America, but which starts deliveries in November of this year. This no-North America policy is because we still don't have enough customers who see the thrill or sense in a $52,000 all-wheel-drive baby sport utility that gets to 60 miles per hour from a stop in under five seconds. Meanwhile, in crazy, drunken Europe, orders for this ridiculous, wondrous set of wheels have, to quote Quattro head of technical development Stephan Reil, "far outstripped the limited production numbers of the business case." Those silly Europeans, don't they know that an RS Q3 makes no sense at all? Sheesh.


The engine is a slightly less uppity version of the five-cylinder used in the TT RS.

The engine is a slightly less uppity version of the "W28" 2.5-liter TFSI five-cylinder used in the TT RS, a car that has always struck me as wrong in execution (admittedly, a minority opinion among the Autoblog team). It's a question of sheer expectations; the TT RS should be a consummate sports car right out of the box and it is not. But then if you place that very same powertrain and drivetrain in a crossover like the Q3, well then heck, it's good enough because my expectations were honestly low prior to shooting off into the curve-covered Alps.

It was most likely due to the very narrow nature of the squiggly two-lanes I was driving that this RS Q3 very soon felt just about perfect. The little CUV and I were routinely arriving at high-altitude coffee stops and lunch/relief breaks several minutes before any of the other big RSes could manage. Overtaking tall German tourist buses and little two-cylinder Piaggios filled with plumbers was rendered easy by the point-and-shoot capabilities of the littler Audi (that nonetheless still cracks the scales at 3,800 pounds, similar to a Ferrari F12 Berlinetta or Chevrolet Camaro Z/28).

The RS recipe is by now relatively repeatable: the RS Q3 is lowered by one inch versus the standard Q3, which accentuates even more the natural dynamic properties of Audi's aluminum-and-steel subframe assembly. The tubular anti-roll bars front and rear are of an ever so slightly greater diameter, again for side-to-side stiffness. For my mountain sojourn at speed, Audi fitted the optional 20-inch five-spoke "Rotor" wheels wrapped in Pirelli PZero treads – 255/35 R20 97Y front and rear. The electro-mechanical steering system, with such a setup and on such prettily maintained mountain pass roads, has come a long way since the Germans started going this route with all of their cars about three years ago. Besides, on a configuration like this Q3, the expectations are again such as they are that the steering exceeded them. The modified lower front wishbones of forged aluminium also help matters significantly when speaking of ride and handling.

The hills were alive with the sound of the music as the RS Q3 thundered along.

Helping matters always here was the latest massaged version of what many call the "faux" Quattro all-wheel-drive setup using the Haldex differential mounted for these smaller transverse engines. Maximum torque to distribute to the front axle as needed is 70 percent, while the max in back is up to 85 percent. This fairly peerless traction system is coupled to an electronically locking differential and, as this is not an RS5 we're talking about, the arrangement works absolutely fine in exceeding every small-utility-vehicle driver's needs, even the sportiest thereof.

Audi says that 70 percent of RS buyers go for the sport exhaust and, I mean, just look at that blunderbuss at bottom left! Put your Audi Drive Select with the Dynamic Package (taken by 55 percent of RSers) in the Dynamic setting and get ready for a few sophisticatedly loud fireworks. The hills were alive with the sound of the music as the RS Q3 thundered along. I am most grateful that the standard compound brake discs – 14.4-inch front ventilated, perforated and using Audi's wave-design technology and an 8-piston fixed calliper, 12.2-inch arrears – handle this tiny terror without any flinches or very much fade to speak of.


There are those who can and so they will buy it.

Along the same lines of logic as I've mentioned already, the seven-speed S-tronic automated gearbox and its shift paddles work exceedingly well here on the dimensions of this Q3 versus how they work for me on the TT RS. On this small sport SUV, the rhythms of shifting up and down over the mountains while pushing the action fairly hard were correct, while they get me grumbling on the TT RS, due almost exclusively to expectations thwarted.

So, I'll acknowledge the demerits for this relatively useless product even existing, but there are those who can and so they will buy it. The same can be said of many glaring status objects that clients are willing to throw money at. But this RS is at least very pleasantly convincing. There will no doubt be a sporty diesel SQ3 priced in a more acceptable manner for more sales to less rich (on average) people, as has been done with the European SQ5. That just makes this gas-driven RS Q3 that much more a standout showpiece for the silly buyers on the Olde Continent who must have one. Sheesh.