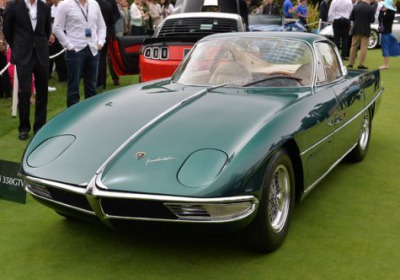 We already brought you a gallery of Lamborghini's latest rockstar, the Veneno, from it's vaunted spot on the lawns of The Quail here in Monterey. Apparently the Italian brand didn't want the Pebble Beach crowds to feel left out, so it brought the supercar along to the Concept Lawn here as well. Not to miss out on the classics action Lamborghini has matched the Veneno with the car that started everything for the company: the original 1963 350 GTV prototype.

With 50 years separating the Veneno from the debut of the hip 350 GTV at the Turin Motor Show, Lamborghini cheekily mentions that it has stuffed "100 years of innovation in half the time." We'll leave the judgments of historical significance in the capable hands of the Pebble judges, but will agree that the original Lamborghini still looks amazingly hot, decades after its reveal. Apparently the classic 350 GTV doesn't travel a whole lot either, so we're happy to have a chance to lay eyes on it here.

HERNDON, Va. (August 13, 2013) –– In celebration of its 50th Anniversary, Lamborghini will host the North American debut of its 'one-off' Veneno show car and a rare display of its first-ever prototype, the 1963 350 GTV, for enthusiasts next week during the annual Pebble Beach Automotive Week.

"Lamborghini's presence at Pebble Beach will be the pinnacle of the brand's 50th anniversary celebrations in North America," said Stephan Winkelmann, President and CEO of Automobili Lamborghini S.p.A. "We're celebrating 100 years of innovation in half the time – what better way than by showing the first Lamborghini ever built alongside our latest racing prototype and road-going super sports car - the Veneno."

The North American unveiling of its $4 Million, 750-horsepower Veneno will take place at The Quail: A Motorsports Gathering on Friday, August 16. The Veneno will then join the 350 GTV, which made its world debut at the Turin Motor Show in 1963, in an exclusive display at the Pebble Beach Concours d'Elegance on Sunday, August 18. Winkelmann will serve as an honorary judge at the Pebble Beach event. Later this year, three Veneno production cars will be delivered to clients around the world.

Lamborghini will host a display and exclusive executive retrospective presentation on Friday, August 16 at Concorso Italiano. The public will then be able to see a selection of the cars in-person during a Concorso Italiano-hosted parade through downtown Monterey and historic Cannery Row on Saturday morning, August 17.
Anniversary celebrations have taken place throughout North America and Europe this year, including the 350-vehicle Lamborghini Grande Giro, the largest-ever Lamborghini driving event, which stormed Italy in May.