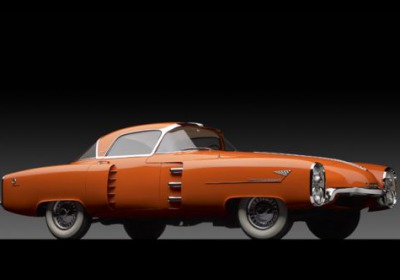 Lincoln was never a brand known for making sports cars. In fact it hasn't offered anything with less than four doors since the demise of the Mark VIII, and that was hardly what you'd call "performance oriented". But that doesn't mean that Ford's luxury marque never toyed with the idea.

In 1955 Ford delivered a Lincoln chassis (along with a 200-horsepower V8 engine and four-speed automatic transmission) to Carrozzeria Boano, an Italian coachbuilder that had just branched off from Ghia the year before. The resulting orange coupe you see here was named after Indianapolis and was unveiled at the Turin Motor Show. And while its detailing may have been divisive, the overall shape certainly caught the eye.

A shining example from the era when Detroit dreamed big and took us along for the ride, the original concept car has since been restored and has toured a select few concours. It's now going up for auction, consigned to RM Auctions for its upcoming Art of the Automobile event to be held in conjunction with Sotheby's on November 21 in Manhattan.

- RM Auctions, in association with Sotheby's, announces latest highlights for its exclusive 'Art of the Automobile' event, November 21, in New York City
- Celebrating the motor car and its place in the history of design, the highly anticipated collector car auction features elite group of more than 25 investment-quality automobiles
- Latest offerings shine spotlight on custom American automotive design, from a streamlined Classic Era roadster through to a flamboyant 1950s dream car
- Frequently updated list of entries available online at rmauctions.com

BLENHEIM, Ontario (September 12, 2013) – Fresh on the heels of its record-breaking Monterey, California sale last month, RM Auctions is delighted to announce three new premiere offerings for its Art of the Automobile event, November 21 in Manhattan. Held in association with Sotheby's, the exclusive and highly anticipated New York collector car sale will celebrate the motor car and its place in the history of design.

From an elegant Classic Era speedster to a striking 1950s dream car, the new highlights shine a spotlight on bespoke American motor cars. For those with a penchant for classical design, there's a spectacular 1933 Auburn Twelve Custom Speedster, while collectors seeking something a little more flamboyant will appreciate the eye-catching 1955 Lincoln Indianapolis Exclusive Study. The group is rounded out by a stunning 1957 Dual-Ghia Convertible, a terrific example of an exclusive 1950s convertible. Each of the three vehicles has been carefully handpicked by RM specialists to represent key design eras in automotive history. In addition, and in keeping with the sale's overriding theme, each signifies the pinnacle of its individual category in terms of quality and presentation and perfectly encapsulates the automobile as a singular achievement at the crossroads of art, technology and innovation.

"Early interest and enthusiasm in our upcoming New York sale has been tremendous, with anticipation levels at an all-time high following the strong results witnessed at our Monterey auction last month and most recently in London," says Ian Kelleher, Car Specialist, RM Auctions. "The New York sale's distinct focus on automotive artistry, combined with the high caliber of entries already secured, along with the unparalleled presentation and service collectors have come to expect from the RM and Sotheby's teams, has set the scene for what will surely be one of the most exciting and unique collector car auctions ever staged."

Alain Squindo, Vice President, RM Auctions, adds, "From a design perspective, the latest group of entries is a terrific fit with the sale, each reflecting unique styling and engineering from its respective period. We are honored to bring this group of trendsetting American motor cars to an exceptional venue in Manhattan."

The Classic Era was highlighted by a magnificent series of elegant, streamlined automobiles. The 1933 Auburn Twelve Custom Speedster, chassis 2119E, represents one of the most beautiful American shapes of the Classic Era. The only surviving twelve-cylinder speedster of three built in Custom trim in 1933, 2119E is certified Category One by the Auburn Cord Duesenberg Club, retaining its original body, engine and chassis. Restored to the highest standards by RM Auto Restoration, it has enjoyed award-winning results in ACD Club national competition as well as at the world-famous Pebble Beach Concours d'Elegance. One of very few genuine, original, ACD Club Certified factory-bodied Auburn Twelve Speedsters remaining, and the only one of its kind known, the upcoming offering of 2119E in New York presents an opportunity not soon to be repeated.

The 1950s represented another significant era in automotive styling, as illustrated by the advent of the 'Dream Car'-futuristic automotive art built to attract public attention at the same time as testing wild engineering ideas. This design era will be showcased at the upcoming New York sale via the flamboyant, future-forward 1955 Lincoln Indianapolis Exclusive Study with coachwork by the Italian firm Boano. Effortlessly combining Italian coachwork on an American chassis, this unique show car was displayed at the Turin Auto Show. It is among the most audacious examples of custom coachwork ever crafted on a Lincoln chassis. Restored to its original appearance, including eye-popping colors and trim, it has been shown in modern times at only a few prestigious events, including the Pebble Beach Concours d'Elegance. A spectacular achievement in design, it is certain to attract strong interest from automobile and art collectors alike.

The list of recent entries is rounded out by an exclusive 1957 Dual-Ghia Convertible, chassis 145. The brainchild of Eugene Casaroll, the Dual-Ghia also illustrates the perfect fusion of Detroit engineering with Italian design. One of approximately 100 examples built between 1956 and 1958, of which the number of known surviving examples is considerably lower, this exclusive 1950s convertible held remarkable prestige among America's wealthy elite, often favored by celebrities. Resplendent in Bronze with a red interior, it is arguably the finest restored and most stunning Dual-Ghia convertible in existence and a very special and prestigious example of one of the most elite and exclusive automobiles of its generation.

Proudly presented by RM Auctions in association with Sotheby's, Art of the Automobile is the first major collector car auction to be held in Manhattan in over a decade. With an emphasis on bespoke design and 'best of category' examples from the world's most admired automotive marques, the sale will feature one of the most significant collections of motor cars offered in auction history. In total, no less than 25 automobiles are expected to go under the gavel at the November 21 auction.

As a prelude to the sale, an extraordinary exhibition showcasing the vehicles on offer will be held November 18 - 20 on the 10th floor galleries at Sotheby's New York-a setting customarily reserved for the display of world-class works of art offered at Sotheby's.

For further information and a frequently updated list of entries, please visit rmauctions.com.