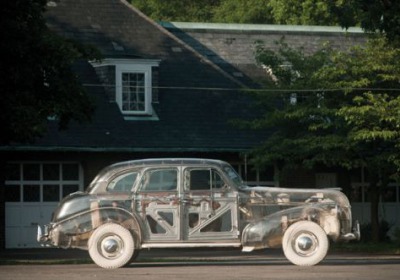 For the 1939 World's Fair, Pontiac built a Deluxe Six bodied in Plexiglass. Part of the Previews of Progress pavilion in which General Motors' Futurama showed off what was to come in the world of autos, the 'invisible' Pontiac is credited as the first transparent car in America. And there were no shortcuts taken with its body: the Plexiglass form was fabricated by the company that brought the material to market in 1933, Rohm & Haas.

The see-through sedan was sold at RM Auctions' St. John's auction in Michigan on July 30, fetching $308,000. Not bad appreciation for a domestic oddity that cost $25,000 to build when new. You can check out the high-res gallery of its innards, including copper and chrome metalwork and white moldings and wheels, and get the exhaustive details on it after the jump.

Visitors to General Motors' "Highways and Horizons" pavilion at the 1939-40 New York World's Fair came away awed by a vision of the future. The work of renowned designer Norman Bel Geddes, GM's "Futurama" exhibit foretold the communities and transportation systems of 1960, many of which came to pass. Other peeks at the future included "Previews of Progress," inventions that seemed like magic: "Yarns made of Milk! Glass that bends! The Frig-O-Therm that cooks and freezes at the same time! The Talking Flashlight transmitting speech over a light beam!" exclaimed the exhibit's guidebook. Sharing top billing with the Futurama and Previews of Progress, however, was the "Glass' Car – The first full-sized transparent car ever made in America."

On the chassis of a 1939 Pontiac Deluxe Six, GM collaborated with Rohm & Haas, the chemical company that had recently developed Plexiglas. The world's first transparent acrylic sheet product, Plexiglas was a serendipitous discovery arising from Rohm & Haas' work with laminated safety glass. Using drawings for the Pontiac four-door Touring Sedan, Rohm & Haas constructed an exact replica body using Plexiglas in place of the outer sheet-metal. The structural metal underneath was given a copper wash, and all hardware, including the dashboard, was chrome plated. Rubber moldings were made in white, as were the car's tires. It reportedly cost $25,000 to build – an astronomical figure in those days.

Plexiglas went on to important military uses – bomber noses, canopies and gun turrets – in World War II, where its strength and transparency contributed mightily to the war effort. After the war, Rohm & Haas developed countless civilian applications, in signs, lighting fixtures, railroad cars and automobiles. With the capability of being molded into virtually any shape and new dyes that allow unlimited color selection, it remains an important commercial and military material.

According to the GM Heritage Center, a second car, on a Torpedo Eight chassis, was hurriedly constructed for the 1940 Golden Gate Exposition on Treasure Island, a man-made island in San Francisco Bay. Once their respective showcases had closed, both "Plexiglas Pontiacs," or "Ghost Cars" as they were sometimes known, toured the nation's dealerships. The 1939-40 Deluxe Six is the only one known to survive.

Following the dealership tour, it went on display at the Smithsonian Institution in Washington, D.C. and was reportedly there until 1947. It was later owned by a succession of Pennsylvania Pontiac dealers. It appeared at the first annual meet of the new Pontiac-Oakland Club International in 1973 and was purchased by Don Barlup of New Cumberland, Pennsylvania. Barlup commissioned a partial restoration from S&H Pontiac of Harrisburg and sold it to collector Leo Gephart in 1979. The current owner's father purchased it from Gephart in the early 1980s, and it has remained in the same family ever since.

The car is in a remarkable state of preservation, a testament to the longevity of Plexiglas in an era when automotive plastics tended to self-destruct within a few years. Although it has acquired a few chips and cracks, it is structurally sound and cosmetically clear, showing off the Ghost Car's innards as it did in 1939. The car rides on its original U.S. Royal all-white tires and sports the correct white rubber running boards. From the beginning it was a running car, although extensive use would have been unduly detrimental. The odometer currently reads 86 miles. The only recent mechanical work has been replacement of the fuel lines.

Not surprisingly, it has no conventional vehicle identification number; even the machined boss for the engine number is blank. The identification number traditionally used for the car is 3113436, probably a part number, found on the radiator. A collection of period photos and other memorabilia accompanies the car, which still turns heads as much as it ever did. It is not, obviously, suited for touring, but as a unique artifact from automotive and cultural history, it deserves a wider audience. It will certainly be welcome at all manner of shows and concours, as well as being suited for a singular museum display. It is no longer the only see-through automobile, but surely the first full-sized transparent car ever made in America has a unique spot in history.