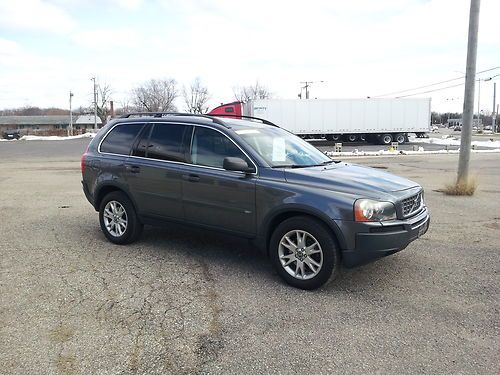 Condition: Used: A vehicle is considered used if it has been registered and issued a title. Used vehicles have had at least one previous owner. The condition of the exterior, interior and engine can vary depending on the vehicle's history. See the seller's listing for full details and description of any imperfections. ...
2005 Volvo XC90 V8 Sport Utility
For sale is our 2005 Volvo XC90 V8 Sport Utility! This is a one owner SUV.  The exterior is gray with 18 inch alloy rims, the tires have about 65% tread, overall no major dings, dents or scratches. The body is in very good condition! The interior is black with leather and gloss finished wood trim all around. Leather is in good clean condition with no rips, tears, or stains.
Everything is power, windows, locks, seats, mirrors. This suv is fully loaded with sunroof, 3rd row seats, Tv's and dvd player system with premium sound*
We believe in making good deals with people looking for a reliable source of transportation that's why our 2005 Volvo XC90 is the best priced on the market with the miles! We have the lowest prices. Do the homework your self, and Come check the suv out and take it for a test drive. Located in Elkhart, IN off of Lexington ave. If interested call  786-459-2642.
Title ready in hand. Ask about our low rates shipping.