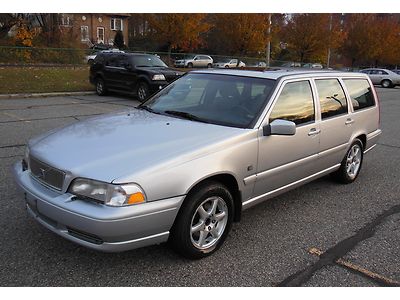 I must have been around Bar Mitzvah age when I was in the back of my parents' car on the highway as we passed a truck full of Volvo 850 T-5R wagons - half of them in black, half in banana yellow. It was one of the coolest things I'd ever seen: a whole gaggle of sleeper power wagons that were infinitely cooler than whatever minivan we were riding in. Hard to believe that was 20 years ago, but it was. And Polestar is understandably keen to mark the anniversary of the first overt Volvo performance wagon.
While Volvo's racing partner hasn't released some commemorative edition to celebrate that prototypical sleeper, it has shot a special batch of photos of the T-5R (based on the 850 wagon internally known as the 855 for its five doors) alongside its modern successor, the V60 Polestar. The images shot in Huntington Beach, CA, only go to show how much has changed in the two decades that separate them.
Whereas this front-drive T-5R packed a turbocharged inline-five driving 240 horsepower through a four-speed automatic propel the yellow box to 62 in 7.0 seconds, the turbo six in the svelter, Rebel Blue-clad 2015 V60 Polestar churns out 350 hp to all four wheels through a six-speed auto for a 4.9-second sprint. That's the kind of progress we can get behind. In fact, it's the sort of progress that everyone can get behind, really, because chances are whatever you're driving will probably have a hard time keeping up.

Volvo confirms return of the wagon with V60 headed to US

Turns out that promised new production Volvo model for the United States is indeed the V60 wagon, as we had previously predicted. And it's not terribly surprising, as Volvo has a long and storied history of wagon sales in the US, from the old, loveable 240 to the more recent high-performance V70R. And yet the automaker hasn't had a proper non-XC, non-crossover-style wagon in the US since it pulled the V70 away at the end of the 2010 model year.
"The new Volvo V60 is for people who want the handling of a dynamic sports sedan but need the versatility of a wagon," says Volvo, highlighting the reason many of us on the Autoblog team harbor such fondness for wagons in general.
Volvo is currently showing off the R-Design package for its entire model line, including the V60, at the New York Auto Show. We don't know for sure if the V60 will launch with the R-Design package or if it will come at a later date, and we also see no mention of a Polestar edition, though we're hopeful.

The 2014 model year is going to see big changes for the Volvo lineup. The biggest news is that the "60 cluster" models (the S60, V60 and XC60) are receiving some substantial updates despite not being all that old, and Volvo is also refreshing the S80, V70 and XC70 models. Of course, the 2014 model year also marks the departure of the C30 and C70 from its lineup, and we still have at least a year to wait until we see the redesigned XC90.
Except for the XC90, all of the 2014 Volvos will be getting noticeable design updates. The S60, V60 and XC60 get more in-depth changes, including a full front facelift. All will use an evolution of the "naughty" design that debuted on the S60. The rear of all three cars get some changes, too, most notably consisting of the reshaped rear fascia with the integrated exhaust outlets. S80, V70 and XC70 will get more minor changes - mostly to bring them in line with the fresher models. The XC70 keeps is rugged plastic cladding, but it gets some stylish wheels with what look like arrowhead accents.
Inside, all of these updated models will new in-car technology such as the Sensus Connected Touch infotainment system and the adaptive digital display with a TFT (thin film transistor) screen. This reconfigurable screen allows the driver to choose between three different themes - Elegance, Eco and Performance - which changes the color and layout of the background. Other new features include heated windshields, Active High Beam Control for the headlights, paddle shifters for a little added driver involvement and IntelliSafe active safety systems (City Safety, Pedestrian Detection and Road Sign Information) The S80, V70 and XC70 will also add heated steering wheels to their respective options sheets, too.