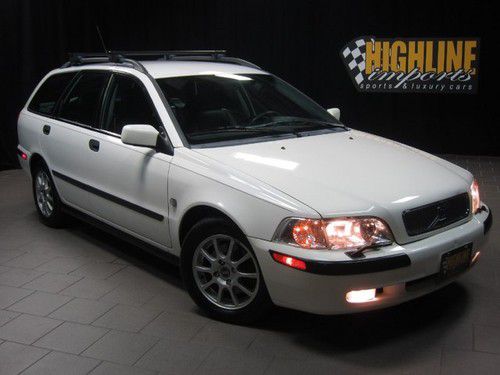 There are plenty of ways to get your holiday tree home from the farm, but few are so classy as this Volvo 850 ute. Built in Sweden and shipped to Belgium, the car wears all of the necessary kit to pass as a 850R, and with a turbocharged 2.3-liter five cylinder under the hood, this creation should have no trouble dashing through the snow. Looks like a mighty fine use of an otherwise derelict Volvo wagon to us, though we have to imagine all that torque steer and no weight over the aft would make for all sorts of silliness once the roads went slick.
Still, if it were our Sawzall, we'd be happier with the keys to a certain BMW M5 utility in our pocket. Or, you know, the 3 Series conversion BMW whipped up not too long ago. You can head over to Autofans.be for a closer look at the 850 ute.

Geely targeting US market in 2016 with help from Volvo

Following reports that it'd team up with corporate sibling Volvo on a Chinese-market car comes a report from Bloomberg that Geely would reattempt its entry into the US market. The Chinese brand had a display at the 2006 North American International Auto Show, but has been absent from the US scene ever since.
The Geely branded cars will be jointly developed with Volvo, and bank on the Swedish manufacturers reputation for safety and reliability. Geely's CEO, Gui Shengyue, explained, "Our acquisition of Volvo enhanced our image and overseas consumers are seeing us as an international company." This represents a change in rhetoric for the brand, after Geely Chairman Li Shufu hamstrung the idea of a closer pairing, citing fears that an association would harm Volvo's reputation. The news of projects between Geely and Volvo first broke last week, although it's unclear if the cars that end up coming to the US will be the same as those being sold in China.
As we reported last week, Geely is already aiming to be the biggest brand in the Chinese domestic market. With this move to the US market, it's also attempting to overtake Chery as China's largest automotive exporter. According to the Bloomberg report, Geely has already moved 180,000 units overseas, which is extremely close to the 184,800 vehicles sold by Chery in 2012. By 2018, Geely anticipates that 60 percent of its sales will be occur outside of the PRC.

Despite just having refreshed nearly its entire portfolio, Volvo is still in the middle of a big product offensive. Vehicles like the C30 hatchback and C70 convertible have been given the axe, but a brand-new platform is being developed in addition to the Scalable Platform Architecture (SPA) that will underpin larger vehicles. According to Automobile, this means some very interesting newcomers may be on tap for the brand.
Volvo, in collaboration with Geely, is said to be working on a new platform about the size of a Volkswagen Golf that will likely spawn both a sedan and hatchback. Automobile reports that while the automaker's new scalable architecture is quite flexible, it cannot be stretched (or rather, shrunk) to accommodate a smaller vehicle.
Instead, SPA will be used for the company's larger offerings, starting with the V40 on the small end. (Though to our eyes, the current V40 looks plenty Golf-sized to us.) A new XC40 is apparently in the works, as is an S90 flagship, and new versions of the XC60, XC90 and S60 will all be coming based on this new flexible architecture.