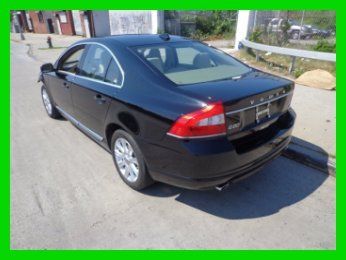 How does a massive Volvo truck compare to a Koenigsegg on a track?

Volvo Trucks thinks that its latest FH semi truck has a little sports car DNA mixed in with the ability to haul heavy loads thanks to its novel dual-clutch gearbox. And the company's marketing department certainly has an intriguing strategy to get the word out about the big rig's sporty traits. First, it staged a prank on an unsuspecting valet on the Italian Riviera, and now the FH has lined up a track battle around the Knutstorp racetrack against Sweden's ultimate supercar - a Koenigsegg One:1.
Fifth Gear host Tiff Needell takes the reins of the big Volvo and spends a little bit of time talking up its I-Shift Dual Clutch gearbox. However, the real fun is seeing the FH taking on the One:1. Of course, a head-to-head battle would hardly be fair against these extremely mismatched opponents. Instead, the challenge is for the 1,360-horsepower Koenigsegg to lap the track twice in the same time or less than the semi can do it once.
You just have to watch the video to see how if the big rig rises to the challenge. Also, scroll down to read Volvo Truck's press release touting the new gearbox, and check out the company's YouTube channel for more views of the race and a behind-the-scenes look.

Tucked into the press release for the "display debut" of the Volvo V60 Plug-In Hybrid at the New York Auto Show, Volvo snuck in a single line announcing that it will also be introducing a new model for the North American market. As much as we'd love to see the svelte V40 on American roads, we're pretty sure the automaker is looking to fill its US station wagon void with the V60.
The 2014 Volvo V60 is part of a comprehensive lineup update that was unveiled earlier this month in Geneva, and it would give Volvo dealers a conventional wagon (not including the XC70) for the first time since the V70 and V50 were killed off. We'll still be keeping our fingers crossed for the stylish V40 hatchback or the fuel-efficient V60 diesel hybrid, but we have to wait until next week to find out for sure.