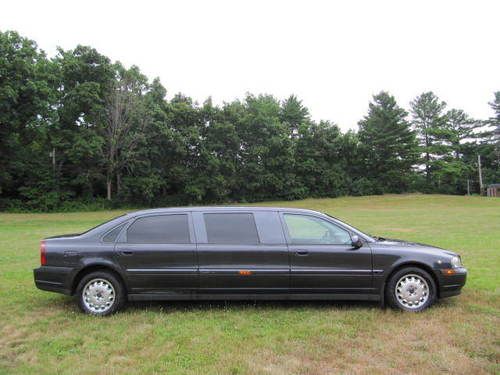 4 doors, seats 2 in driver cockpit, has 2 rows of seats which face each other in the back - can seat up to 6 in the rear. There's a dual clear glass and black-out partition between the driver and the rear.
This is an extremely rare vehicle.  Factory built in Sweden and imported to the United States by the Swedish Consulate.  There are only 2 of these in the U.S. and around 18 in the World. The retail price of the S80 limo is approximately $140,000 USD.
From Wikipedia:
"The current official car of the King of Sweden is a stretched Volvo S80, escorted by the Swedish Security Service in BMW X5, BMW 5-Series and Mercedes-Benz E-Class models. For official occasions like state visits there is an Daimler DS420. There are also a number of different cars in the Royal Mews, which are used on special occasions."
This car has a normal left-side steering wheel and is EPA certified for sale in all 50-states.  The limousine is privately owned and used for pleasure in Los Angeles, CA.
---
Mechanically the limousine is in excellent condition, no known problems or defects.  The air conditioner is ice-cold.  It's been used on every occasion with extreme confidence of its mechanical fitness.
Overall external condition of the limousine is fair.  Here is the list of known external defects:
1) 6-8" area of paint bubbling on the right side of the top
2) Tinted windows have various scratches and the back window tinting shows peeling cracks
3) Various plastic pieces in cockpit (frame around the drive light switch) are either missing or not correctly attached.
4) Interior passenger arm-rest on right side is loose and plastic inserts are broken.
5) Left side passenger window (two-seats facing the rear) is off-track and does not slide down correctly.
6) Front right bumper was strained resulting in slight denting under the hood and the wheel cowl plastic is separated.  This is the biggest known problem, but existed when the limo was acquired and has been duct taped shut, but needs attention.
7) Externally the car has various missing or broken reflectors, missing plastic accent plastic on edge.
8) The left and right door panels have scraped paint and or areas that are scratched and dented where the limo was incorrectly navigated around tight corners.
9) There are many small areas with paint chips, cracks, or other blemishes that warrant inspection or repair.
10) The front headlights have some interior fogging on one or both sides.
The above repairs and paint condition were quoted approximately $1800 to address.  If you wanted to be extremely picky/thorough and fix every last minor problem so the car is absolutely flawless, you would probably want to budget around $3000.
Since it was used for pleasure, mostly in the evening, it was never pursued to fix all the blemishes and external defects.  The limo's hosted celebrity friends, business associates, and guests without any real embarrassment of the aforementioned problems.
Serious inquiries and further questions --- contact seller through E-bay and we can exchange phone numbers.

The most important new Volvo in quite some time has made its first auto show appearance, with the second-generation XC90 debuting at the 2014 Paris Motor Show.
As we discussed in both our original post and Deep Dive feature, the new XC90 remains a three-row crossover for 2015, although it ditches the first-gen model's top-end, turbocharged six-cylinder in favor of a single twin-charged, 2.0-liter, four-cylinder engine. By pairing that with a plug-in-electric powertrain, the king of the XC90 range, the T8 TwinEngine, will offer up 400 horsepower. So yeah, performance should be brisk.
Also appearing on 2015 XC90 will be an entirely new, Apple CarPlay-compatible infotainment system with a big, vertical touchscreen display at its heart. Based on the videos we've seen, the new system looks responsive, feature-laden and quite attractive.