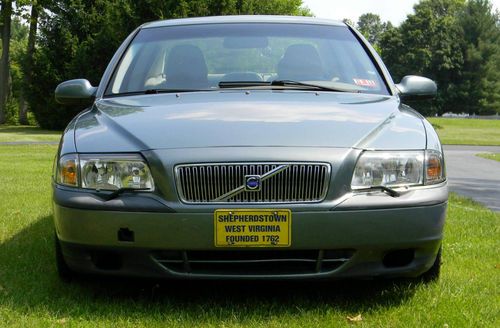 Condition: UsedA vehicle is considered used if it has been registered and issued a title. Used vehicles have had at least one previous owner. The condition of the exterior, interior and engine can vary depending on the vehicle's history. See the seller's listing for full details and description of any imperfections.Seller Notes:"This is a solid vehicle, but as with any car of this age it does show wear. The leather in the drivers seat is worn. Also, this vehicle may need a O2 sensor."

This is a nice vehicle at a very reasonable price, it is priced below the Kelly Blue Book value.

Volvo's are built solid, with safety as the #1 priority.

This S80 still has many more miles to run.

The following is what I have replaced in the last year:

The only problem that I am aware of is that it will soon need (2) O2 sensors.

Feel free to ask any questions.

The most important new Volvo in quite some time has made its first auto show appearance, with the second-generation XC90 debuting at the 2014 Paris Motor Show.
As we discussed in both our original post and Deep Dive feature, the new XC90 remains a three-row crossover for 2015, although it ditches the first-gen model's top-end, turbocharged six-cylinder in favor of a single twin-charged, 2.0-liter, four-cylinder engine. By pairing that with a plug-in-electric powertrain, the king of the XC90 range, the T8 TwinEngine, will offer up 400 horsepower. So yeah, performance should be brisk.
Also appearing on 2015 XC90 will be an entirely new, Apple CarPlay-compatible infotainment system with a big, vertical touchscreen display at its heart. Based on the videos we've seen, the new system looks responsive, feature-laden and quite attractive.