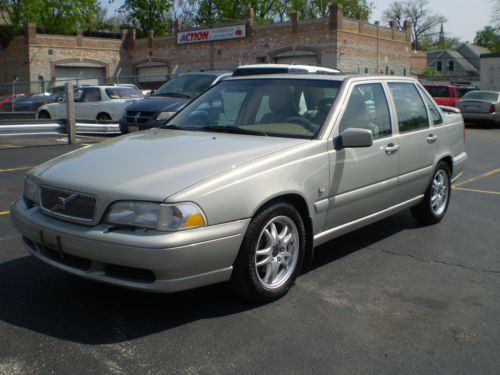 You saw their US reveal at this year's Chicago Auto Show and read our driving impressions from Sweden. Now, if you act fast, you can actually own one of the very limited 2015.5 Volvo S60 and V60 Polestar models coming to the United States. The order page for these slick Swedes is now online, but the slots are filling up about as quickly as these cars accelerate.
Volvo plans to build a combined 750 of these Polestar models for the world, but the US is being allocated just 120 of them. Prices start at $59,300 for the S60 or $60,900 for the V60 (*plus a $925 destination charge). The only option is color - either Black Sapphire or Rebel Blue. If rarity is playing a part in your decision, you might want to pick the S60. According to the reservation site, only 20 of the sedans in each color are making it over here; the rest are V60s.
As the top versions of their respective models, both Polestars are packed with features. They share a turbocharged, 3.0-liter inline six-cylinder engine rated at 345 horsepower and 369 pound-feet of torque with a six-speed automatic transmission and a rear-biased all-wheel-drive system. Acceleration to 60 miles per hour is claimed to take 4.7 seconds for the S60 or a tenth more for the V60 with a top speed of 155 mph. They are about more than just a hotter engine, though, with Öhlins shocks, six-piston brake calipers and 20-inch Polestar wheels with Michelin Pilot Super Sport tires. Check out the gallery for the full, official specs, and get to the order page soon, if you decide you need one of these limited Swedish sportsters.

If we were to paraphrase the opening lines of Kenneth Graeme's Wind in the Willows for our own purposes, we'd write, "Have you heard about Volvo? They never planned a new crossover at all. It was all a horrid low trick of theirs...." To be fair, though, we can't blame them for our own presumption. When the Swedish car company created a site called LeaveTheWorldBehind.com and teased a couple of videos for some kind of collaboration with Swedish House Mafia, we thought the crossover in one of the teasers pointed to a new vehicle on the way.
Turns out that's not the case. It really is 'just' a collaboration with the band on a music video for Swedish artist Lune's cover of their 2009 song, Leave the World Behind.
But there are Volvos in it, and you can watch it below and hear original song alongside. We've also included the press release with more details on why it all came together, and a behind-the-scenes video on the collabo. To paraphrase Forrest Gump, "That's all we have to say about that."