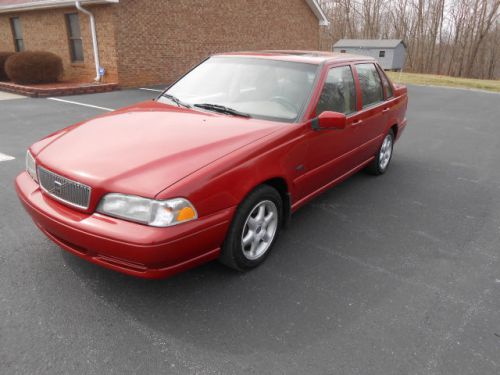 Australian auto news has been dire for the last several months with all three automakers that build there announcing they would stop production within the next three years. But Volvo is providing a shot of excitement with the unveiling of its new S60 racecar for the upcoming season of the Australian V8 Supercar series.
The Volvo S60 racecar will use a 5.0-liter, naturally aspirated V8 based on Volvo's B8444S production engine that will be tuned to produce roughly 650 horsepower on E85 ethanol. Power will get to the ground via a six-speed sequential transmission, and it will be able to reach 62 miles per hour in 3.2 seconds and a top speed of 185. All cars in the series use common parts for the chassis, transaxle, and rear suspension.
Volvo's Polestar performance arm will campaign two of the S60 racers this season. While Volvo might seem like an odd inclusion into Australian racing, it actually has quite a successful history. It won the 1986 Australian Touring Car Championship in a 240 and won the Bathhurst 1000 race in 1998 in an S40. Polestar is not new to racing either, having been racing Volvos around the world since 1996.

Next Polestar Volvo sounds great, whatever it is

Something - we don't know what yet - is coming from Polestar. While we'll be recovering from next week's LA Auto Show and Tokyo Motor Show (and starting to slack off ahead of an extended Thanksgiving weekend), the official tuner of Volvo products has announced plans to unveil its latest creation in less than two weeks.
Based on this video teaser, we can only imagine (and hope) that it's the souped-up Volvo V60 recently caught testing by our spy shooters. The idea of a high-performance Volvo wagon was already enough to get us giddy last month, but the exhaust note in this video is downright captivating. Scroll down to watch the teaser for yourself, and be prepared for some bright blue wagony goodness to be revealed on November 26.