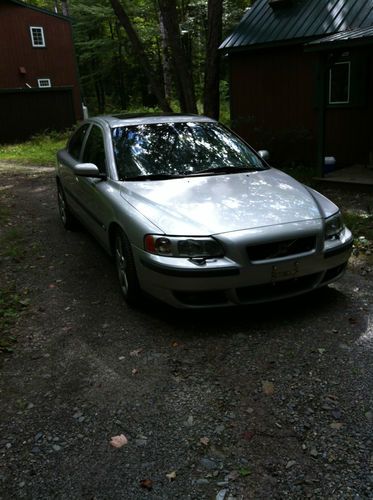 This is a nice vehicle.  Needs some TLC.  Has the typical Volvo issues in the interior.  Drivers seat leather need work and the center console needs work.  Everything else in the interior is nice.  The AWD brain needs to be rebuilt.  The oil pan needs to be replaced and the O2 sensors need replacing.  Other than that this is a solid car and was a daily driver.  I am selling it for a new business venture.  Great driving car fun and fast!

Often dashcam footage from Russia shows some of the worst driving imaginable, but this is an exception. The Volvo truck driver in this video definitely earned himself a drink or two at the end of the day after making it through this potentially horrific crash. As do the folks at Volvo that engineered those brakes.
The truck driver shows some fantastic reaction time as the silver hatchback suddenly pulls out of an intersection. It looks like he only has a few yards to bring the behemoth to a stop before demolishing the little car. While it's an impressive feat, the best part of the video has to be the driver's bow when he gets out of the truck. He looks like a maestro who just finished conducting a symphony asking for a round of applause.
Scroll down to check out this truck driver's skills and see if he earns his bow afterward.

Is it just us, or has Jay Leno's Garage evolved from an intimate, off-the-cuff video series designed to show off the late-night comedian's automobile collection into something a lot more ambitious and... mainstream? This isn't a complaint, exactly, as Leno has been putting out engaging videos at an increasingly furious pace. However, we can't help but note that the subjects have largely graduated from the funnyman's steam-powered eccentricities and forgotten classics to lots of new production and concept cars, often with automaker execs in tow. It's almost as if the series is turning into an internet version of his NBC talk show, one where bigwigs swing by to show off their latest projects as part of their publicity tours, only instead of new movies and albums, it's cars or the occasional motorcycle.
Such is the exactly case with Volvo's stonking S60 Polestar Concept, which makes its appearance in Jay's warehouse of wonders this week. Tuned by in-house skunkworks Polestar, the "Swedish Racing Blue" S60 has certainly been making the rounds as of late, with recent appearances near Leno's garage at the LA Auto Show and an Auto Motor und Sport track faceoff against the BMW M3 and Audi RS4 Avant.
Perhaps we shouldn't be surprised that Volvo is so keen to get its showcar in front of the cameras - last we heard, executives were seriously considering a small production run for their unlikely 508-horsepower, all-wheel drive sport sedan, though we continue to hear that realistic pricing is likely to be a roadblock.

Volvo Concept XC Coupe is ready to hit the slopes

There's something inescapably right about a Swedish car with a set of skis on its roof. It doesn't matter if it's a Jurassic-era Volvo Amazon, a Saab 900 Turbo, or even a Koenigsegg Agera R. Surely it's some sort of Scandinavian birthright... right along with immaculate complexion. The latest to carry on that tradition in fine form? The Volvo Concept XC Coupe, just released at this week's Detroit Auto Show.
The two-door, four-seat XC Coupe rolled onto stage here at Cobo pre-outfitted with a matching ski box, looking sharp on its 21-inch wheels. According to Volvo, the box isn't an afterthought - in fact, the XC Coupe's design itself was "inspired by modern sports equipment."
As for the rest of the concept's genetic makeup, at this point, we don't have much to go on. Volvo has admitted that the XC Coupe rides atop its new boron-steel-intensive Scalable Product architecture, but it has declined to outline any sort of powertrain details. We're not sure if this showcar has any production future, but we do expect for its design language to inform the next-generation XC90 crossover.