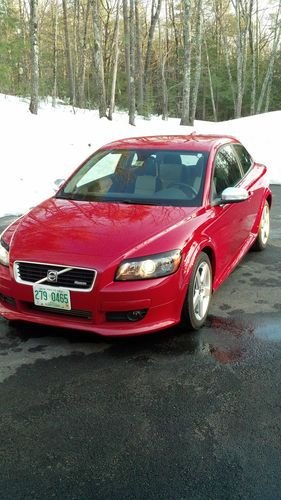 Red Sox decal on back window (can be easily removed), Red Sox mats (have another set of mats and have not used these but come with car) and a small dash plaque signifying this a Special Red Sox Edition 007 of 107 (they all came with same color scheme).  Manufacturers suggested retail price new was $28,960.00.  There are a couple of appox. 1//8" diameter stone chips in the front spoiler but are so low they are barely visible.

When the doors open at the Cobo Center next week for the 2014 Detroit Auto Show, Volvo will lift the veil on its new Concept XC Coupe. But you don't have to even wait that long. A set of images leaked out yesterday to accompany a teaser video released by Volvo, but now the Swedish automaker has revealed the full thing.
The second of three new concept cars aiming to show the way forward for the brand, the Concept XC Coupe follows the Concept Coupe revealed last September. Based on Volvo's Scalable Product Architecture, the Concept XC Coupe is expected to preview the next-generation XC90 crossover, but with two fewer doors and a four-seat cabin.
With orange details, matte rubber moldings and underbody skid plates, the design is said to have been inspired by outdoor equipment manufacturer POC - naturally also based in Sweden - whose products are favored by extreme athletes around the world. It rides on 21-inch wheels and incorporates T-shaped DRL headlights, with distinctive tail-lights earmarked to make their way onto the next generation of production Volvos.

Last month, Volvo gave us a teaser of its new Concept XC Coupe, set to debut at the Detroit Auto Show. And now, just a few days before the doors open at Cobo Hall, leaked images of the stylish new crossover showcar have leaked online, courtesy of CarBuyer.co.uk.
The Concept XC Coupe is a sort of high-riding successor to the very attractive Concept Coupe that wowed us at the 2013 Frankfurt Motor Show. With its burlier dimensions and hatchback configuration, the Concept XC gives us a better glimpse at Volvo's new styling direction, which is expected to debut in production form on the next-generation XC90 crossover. We've already seen some leaked sketches of the new XC90, and it sure does look like this Concept XC.
We don't have any further details about the Concept XC Coupe, but from the images, we can see that it will use a four-passenger seating configuration, with rear seats that fold flat. There are also exterior badges for surround radar and a 360-degree camera system, suggesting some new safety tech fitting of safety-minded brand.