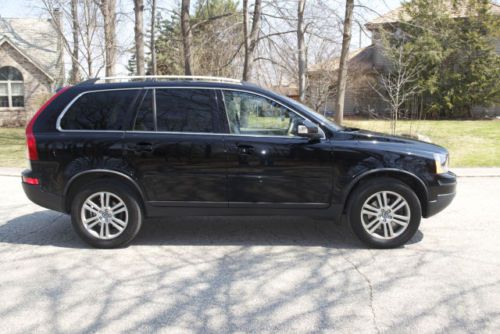 There's not a whole lot of life left in the current Volvo XC90, but it seems a replacement is on the way. According to What Car?, Volvo will launch its new flagship crossover sometime in 2014, riding on an all new platform that will eventually underpin several models in the company's range.
According to Volvo boss Hakan Samuelsson, this new architecture will eventually underpin the next-generation S60, V70, S80 and XC60, all of which will be getting mid-cycle enhancements over the next year. In speaking to What Car?, Samuelsson said that Volvo would not try to follow the paths set by BMW and Mercedes-Benz, instead focusing on "safety, elegant design and user-friendly functionality" for its next round of new cars.
The new XC90 will remain a seven-passenger vehicle and will be powered by a range of four-cylinder engines. Volvo will soon be dropping the five- and six-cylinder powertrains from its lineup.

Volvos will brake for bicyclists with new detection technology

Anyone who pedals a bicycle knows that one of the biggest dangers to riders is a motorized vehicle - Volvo estimates that nearly 50 percent of all cyclists killed in European traffic have collided with a car. In the United States alone, 618 riders lost their lives in bicycle/motor vehicle crashes in 2010, and the number of injuries surpassed 52,000.
To help drop those numbers, Volvo has just announced Cyclist Detection with full auto brake - a technology that detects and automatically applies a vehicle's brakes when a cyclist swerves in front of a moving car. The basic components of the system include a radar unit integrated into the front grille, a camera fitted in front of the interior rear-view mirror and a central control unit. The radar is tasked with seeing obstacles in front of the vehicle and calculating distance, while the camera is responsible to determine what the object is. The central control unit, with rapid processing capabilities, monitors and evaluates the situation.
The technology, which will be sold bundled with its Pedestrian Detection and called Pedestrian and Cyclist Detection, will automatically apply full braking when both the radar and camera confirm a pedestrian or cyclist are in the immediate path of the vehicle. According to the automaker, the technology will be offered on the Volvo V40, S60, V60, XC60, V70, XC70 and S80 models from mid-May in 2013.