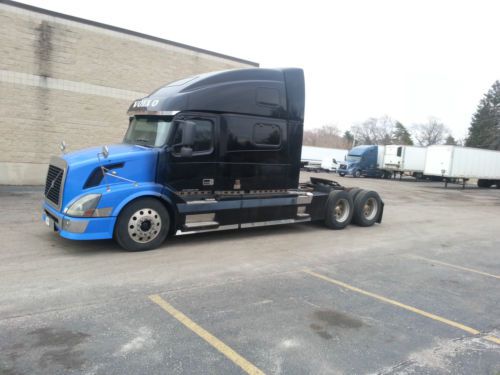 Volvo has made quite a few changes to its US lineup for the 2014 model year. The C30 hatchback and C70 convertible are gone; the S60, S80, XC60 and XC70 have all been reschnozzed; and in a few months, Volvo will bring its V60 wagon across the pond for Stateside consumption. Only the range-topping XC90 carries on unchanged, though a brand new version is expected to launch sometime next year.
The S60 starts as low as $32,400 for the entry level T5 model, and reaches as high as $45,700 for the T6 R-Design Platinum trim. The larger S80 sedan starts at $39,900, with its range-topping T6 Platinum version commanding $48,150. XC70 pricing ranges anywhere from $34,500 for the 3.2 FWD to $45,650 for the T6 Platinum, XC60 numbers span from $34,850 to $49,800, and XC90 prices start as low as $39,700 and as high as $45,400. None of these prices include $895 for destination, and pricing for the swoopy V60 wagon has not been released just yet.
While the majority of Volvo's 2014 model year enhancements are visual, some neat updates have been made mechanically, as well. There's a new Advanced Quick Shift mode for the six-speed automatic transmission that's paired with the turbocharged six-cylinder engine, and Volvo says that the S60 R-Design will now scoot to 60 miles per hour two-tenths of a second quicker (5.3 versus 5.5). In the XC60 R-Design, AQS improves 0-60 acceleration by four-tenths of a second, down to 6.2 from 6.6 seconds.

The debate about what direction to take perennially struggling Volvo has been raging for years. Should the Swedish marque go upscale and try to chase other European luxury brands, or should it stick to its safety-minded knitting? Should it adopt flashy new styling and a more overt performance bent, or keep it Scandinavian clean and responsible? Chinese parent brand Geely apparently has designs on making Volvo a full-fledged BMW rival - particularly in its homeland - including pushing for a range-topping 7 Series competitor. However, Volvo execs have been repeatedly pushing back on the idea. In fact, it's understood that this philosophical crisis contributed mightily to the high-profile departure of Stefan Jacoby, the company's CEO until the middle of 2012 (Jacoby has since rebounded to head international operations for General Motors).
There doesn't seem like any middle path in this debate, but that apparently isn't going to stop Volvo from trying. According to a sprawling Reuters report, Volvo will placate Geely chairman Li Shufu with a stretched and lux'd up version of the next S80. Yet Li still isn't completely satisfied, and he's said to be pushing for "a plusher and bigger model he calls the S100" to rival cars like the Audi A8. For the moment, it is not clear if the larger S80-based model will be a global offering, or just another one of China's many home-market, long-wheelbase specials.
The question of future Volvo styling is up for debate as well. According to Reuters, "Insiders say Li is a big fan of the new styling that design chief Thomas Ingenlath has brought to Volvo" (The latest example, the Concept Coupe from this week's Frankfurt Motor Show, is shown above.) Yet there are those who worry whether the company's new styling strategy is showy enough to appeal to China's wealthy. Chairman Li would still like to see a range-topping sedan for "show-off people," but Volvo's management doesn't want to go down that road. Clearly, this won't be the last we hear about the company's existential boardroom battles.