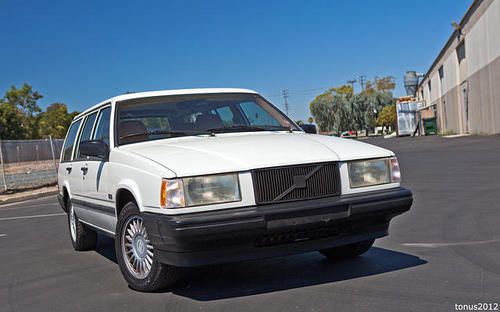 1999 LS1 with 101000 miles on it.  Motor runs smooth and strong.
1999 T56 with the same mileage, shifts into all gears smoother than any other t56 I have driven
Yoshifab Gen 3 V8 mount kit
Custom drive shaft
GM LS7 Clutch/Flywheel (1000 or so miles on it)
C6 exhaust manifolds
LS6 intake manifold
SLP MAF
4" intake pipe/K&N filter
Pro 5.0 Shifter
Custom 3" exhaust (sounds very nice, just enough rumble to let you know its a v8 but nothing crazy)  Nobody even seems to look twice when you roll through a parking lot.)
Yoshifab rear subframe reinforcement kit
G80 locking differential
AC compressor replaced this week
Goodyear tires have about 1000 miles (well lets say 2000 miles after the burnout pic) on them.  Just have the fuzzies worn off.
Accessory belts and pullies are all about 1000 miles old

The beauty of this car is the overall condition.  It is  not perfect but much nicer than your average Volvo of this vintage.  Paint is still in very good shape but a few shopping cart kinda dings.  It has been very well maintained, all the suspension and steering is tight and the breaks work well. The car runs and drives totally normal, my wife has no issue stepping out of her new Corolla and driving this to the store.  It has working ac, good road manners, and a very smooth ride.  The idea is a car that drives like a normal Volvo wagon but with a lot more zip.  It works quite well.  The car was a diesel in a previous life and the CA title still reflects that.  Shipping can be arranged but buyer will be 100% responsible for shipping costs.  Last Volvo I shipped went cross country for around $800

Volvo buyers have best credit scores among all auto shoppers

Experian, the US credit reporting agency, recently concluded a study into the financing and credit scores of US car buyers. One of the prime findings was that Volvo buyers enjoy the strongest credit scores among new car shoppers from all brands (nota bene, these are Experian's own numbers and can differ from other agencies). Unlike the Forbes report on the same story, though, we don't find that surprising at all, nor do we think it necessarily helps Volvo's upscale brand aspirations. The Gothenburg-based carmaker has sold its wares on tank-like safety for decades, so it seems natural that its buyers would be just as safe with and attentive to their credit scores as they are with their choice of vehicle.
Audi was ranked fourth by consumer credit score, Porsche seventh and Mercedes-Benz ninth, yet the fact that Volvo outranks them in this metric is probably a plus to its bottom line but not necessarily its image. It's not unfair to say more people desire those other luxury brands - Volvo itself has admitted as much - and people in the throes of desire have been known to be a little more let-it-ride about things like credit scores. The differences aren't huge, though: compared to Volvo's 818, Audi shoppers scored at 813, Mercedes shoppers 802. Lexus and Acura intenders took the other two steps on the top-credit-scores podium.
Mitsubishi took the honors at the other end of the charts, Experian finding that its potential customers, with an average of 604, had the lowest scores. Mitsubishi was followed by Suzuki and Dodge. On the other side of the financing table, Toyota led the way in how many of its vehicles were bought with bank assistance, followed closely by Ford, Chevrolet taking third place. Also of note, and for whatever it's worth, not one automaker made both the 'top ten by financing' and 'top ten by credit score' lists, but four made both the financing and 'bottom ten by credit score' lists: Chevrolet, Nissan, Kia and Dodge.