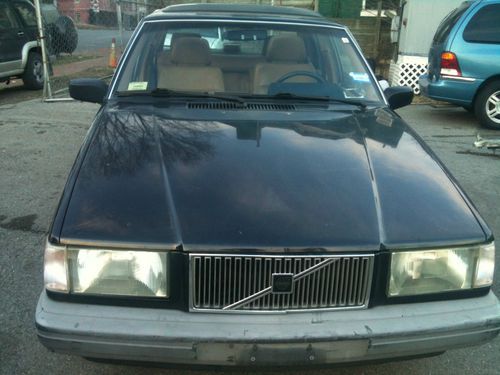 Up for auctiom is a 1990 volvo 740 GLE sedan. The car runs and drives great, low miliage, no rust, a little body damage on the driver side door, the back seat has unoticable crack and the dash also couple of cracks. Everything works as it should and it's only 86,906k miles and yes the odometer works as it should. You can drive this car home or around the country without any worry.

Volvo may be better known for turbo fives and inline fours, but in 2005 it launched the XC90 with a new eight-cylinder engine built for it by Yamaha. Fast forward to this past June when Volvo announced its intention to enter Australia's V8 Supercars series, where it would compete with the likes of Ford, Holden, Nissan and Mercedes-AMG. This is the engine with which it intends to do so.
Revealed this weekend at the Sydney 500, this competition-spec powerplant is based on the same B8444S that powered the XC90 and S80 (not to mention the Noble M600), but tuned for racing duty to be shoehorned into the new S60 touring car. The 60-degree aluminum block has been bored out from 4.4 liters to 5.0, its compression ratio boosted to 10:1, modified to run on E85 bio-ethanol and its redline increased to 7500 rpm. Volvo also promises a unique engine note from its new racers.
While Volvo and its racing partner Polestar haven't released official output numbers, regulations call for outputs between 620 and 650 horsepower - in any event, a whole lot more than the 311 hp it produces in stock form. (Noble managed to squeeze that much out of the same block, but that required twin turbochargers while this unit remains naturally aspirated.) Scope out the details in the press release below and the photos from the reveal in the gallery above.