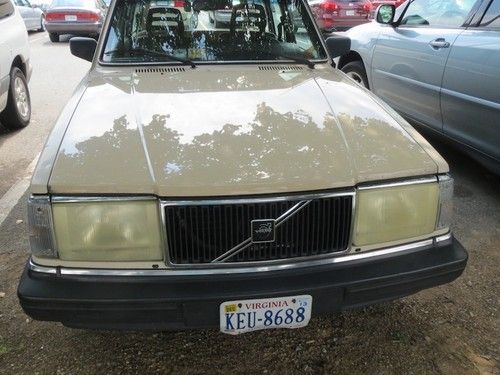 Condition: UsedA vehicle is considered used if it has been registered and issued a title. Used vehicles have had at least one previous owner. The condition of the exterior, interior and engine can vary depending on the vehicle's history. See the seller's listing for full details and description of any imperfections.Seller Notes:"Odometer brokenOne sun visor hook is brokenRips in driver seat and smaller one in passenger seatFan blower is loud when car is coldAir conditioning very weak (but heat is strong)Cracks in dashSeat heaters may not workBack hatch doesn't latch (door is so heavy it never mattered to me)Dog chewed some upholstery in trunk areBackseat seat and seat back don't perfectly match in colorHood was re painted same color but looks newer than rest of carSome trim on one side was loose and is being solidly held by duct tapeMap pockets in good shape but are black (not original)"

It starts and runs. But it isn't a perfect specimen by any stretch. Engine was replaced about 3 years ago. Recently passed Virginia inspection.

Here are all the flaws I can think of:

Odometer broken
One sun visor hook is broken
Rips in driver seat and smaller one in passenger seat
Fan blower is loud when car is cold
Air conditioning very weak (but heat is strong)
Cracks in dash
Seat heaters may not work
Back hatch doesn't latch (door is so heavy it never mattered to me, but if you worry about the security...)
Dog chewed some upholstery in trunk area
Backseat seats and back don't perfectly match in color
Hood was re painted same color but looks newer than rest of car
Some trim on one side was loose and is being solidly held by duct tape
Map pockets in good shape but are black (not original)

As a part of eliminating its dependence on Ford platforms and powertrains, Volvo has previously announced information about its Volvo Engine Architecture (VEA) and Scalable Platform Architecture (SPA), but now we're finally getting some details about what will power some of the Swedish automaker's next-generation products.
The biggest key to VEA on the diesel engines is a new technology Volvo calls i-ART. This system uses unique injectors at each cylinder capable of monitoring fuel pressure and adjusting accordingly to maximize fuel economy and performance and reduce emissions. Looking ahead, Volvo says its four-cylinder engines will be able to offer the power of a six-cylinder and eventually, mixed with some sort of electrification, will be able to rival the performance of a V8 and "turn V8s into dinosaurs."
More details about the new diesel injection technology is posted in the press release below.