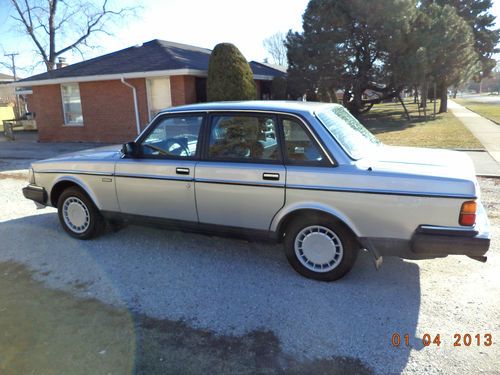 Very reliable 1989 Volvo 240. Good tires. Terrific interior. For the most part, the body is in great shape but there is a rust hole in the passenger-side rocker panel and there are some scratches

I'm selling this for a dealer friend and selling it with no reserve since he ran out of space on his lot and he needs to get rid of it.
The air conditioner doesn't work. He tried to fix it but he really doesn't know anything about A/C so it could be something as simple as a charge, but we don't know for sure.
It does run well. The battery probably needs to be replaced but, if the car brings what it should, we will make sure that issue is corrected.
We don't know anything about the history of the vehicle since it was purchased at a donation auction.
It's pretty much a plain model but that just means there are fewer things to go wrong. Volvos (especially the 240 series) are notorious for their reliability and safety. These cars are popular on college campuses and for any seeking that "retro" look.
This is a used vehicle, almost 25 years old, so there are no warranties, intended or implied.
If possible, please come and take it for a test drive and fall in love