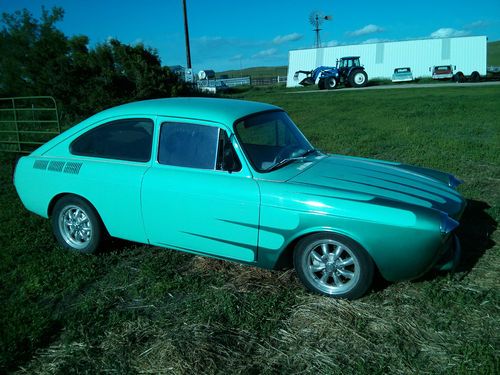 This is a rare car that you don't see every day. I've seen numerous Squarebacks and Notchbacks in the type III category but I have never seen a Fastback. Although it still needs some work to be complete, it is a cute care that always catches the eye as you drive by.

The interior is probably the biggest challenge for this car. The seats need redone, the weatherstripping needs replaced, and the electronics in the dash need to be rewired. On the exterior the car probably needs new tires along with an alignment. The windshield has a crack in it. The paint needs some touch up points; there are a few dings in the paint, mainly a big spot on the drivers side door which is showing surface rust. There is a picture of it down below.

Like I said this is a custom car, the door handles have been shaved off. This means that there is a small button on the doors which pop the doors open and the trunk and hood have a button also. The original drum brakes have been upgraded to disc brakes and the front end has been lowered 2-3 inches. The biggest thing about this car is it has a brand new engine with only 1000 miles on it. I was told by a mechanic that it is an air-cooled 1800cc engine.

I bought this car in hopes of fixing it up and making a daily driver of it. But being a college student, it's hard to find the time to take on this project. When I have driven it though through town or down the highway, I always get looks, and somebody always wants to ask me about the car. The main question I get is 'What kind of car is that?' because this car is a classic that people haven't seen in over 30 years. Enjoy bidding and if you have any questions feel free to e-mail me.