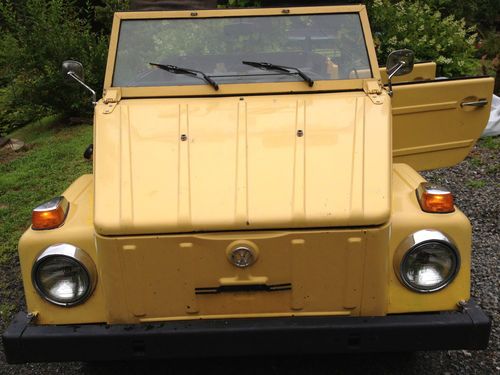 Condition: UsedA vehicle is considered used if it has been registered and issued a title. Used vehicles have had at least one previous owner. The condition of the exterior, interior and engine can vary depending on the vehicle's history. See the seller's listing for full details and description of any imperfections.Seller Notes:"Could use a paint job. Looks like it was originally white. It is now yellow on the outside/black on the inside. The black paint is starting to flake off."
You're bidding on a 1974 VW THING 181
This VW is pretty solid.  It could use a new paint job.  Looks like it was originally white and than painted over.  The outside yellow and the inside black.
The black paint is starting to flake off to reveal a shiny white coat.   I do not know to much about this VW THING.  I took it out of a barn this spring... put in a new battery and gas.  She started right up.  I took her on a 3 hour trip w/ no issues.  She does shake a bit when you hit 65mph.
She does have a cracked windshield. I do have a nice replacement windshield that will need to be installed.
I do not have a top or frame.
Please feel free to ask any questions.  I will do my best to answer them.  It's a could foundation for restoration or register her as an antique and drive it as is.
Thanks again.