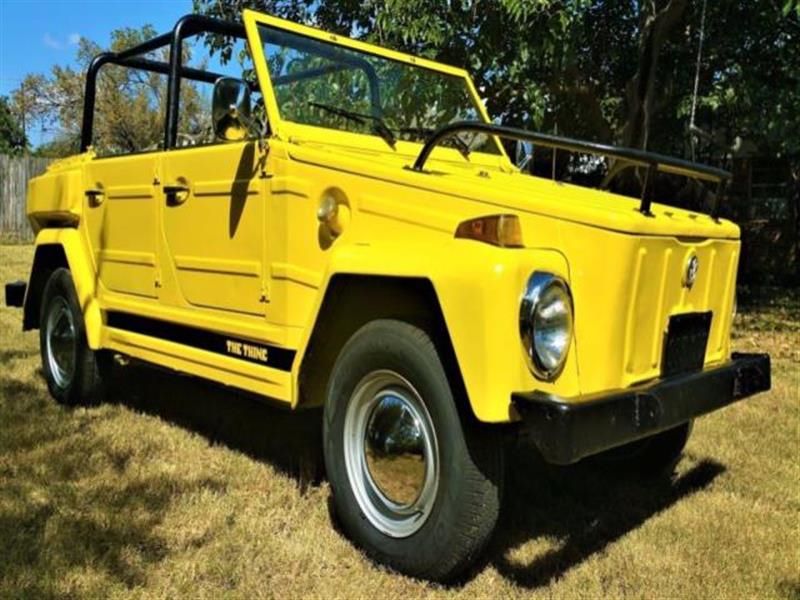 Send me questions at : GaryHolmeshle64ny5bs@yahoo.com 1974 VW Thing no reserve !!!!!!!!!! Look around, you won't find one in thisCondition for less. Be the only one in your city to own a rare classic likethis. Everyone looks at this car everywhere I take it, hardly anyone even knowswhat it is. The VW THING was only imported to the United States for 2 years…1973 and 1974 and that’s it! I have had this car for a little over a yearand the clear Texas Title is in my name. All the gears work on the transmissionand the Odometer is showing 55K miles. The steering is tight thanks to all thenew parts and the car riding on 4 new tires. The engine is a 1600 single portwith dual relief that starts and idles properly. This car starts, runs, drivesand stops, with great response and pep for a VW. The entire Brake system wasreplaced. Seats are correct style new seat covers on all seats and new paddingin front seats. Front seats are also thing only original seats. Wheels are thehard to find, original and correct 14 inch wide five smoothies with the correctoffset that have been sanded and painted factory silver and have brand new tireson them and brand new hubcaps. The typical floor rust was in one spot in thebattery tray that has been cut out and been replaced with 20 gauge steel weldedin. This car will be a great daily driver. The horn, 2 speed wipers, turnsignals, hazards, brake lights, bright and dim headlights lights all work. Oilpressure and alternator light both work. Car also has an aftermarket