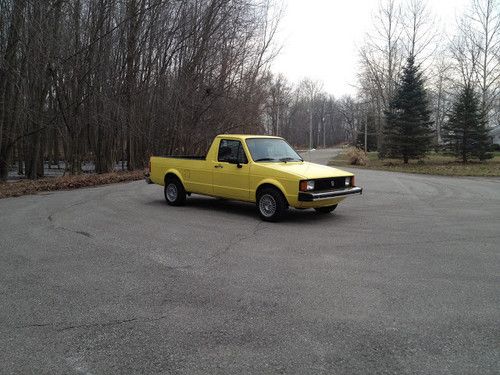 Hi there I have this great example of a well kept Rabbit Caddy im offering for sale. I will start off by saying I love this little truck to death and am hesitant to even put it up for sale, but I have two trucks and no need for both so one of them has to go. But I will gladly keep this truck if I dont get the right offer. Ive had this for several years, always been a good runner, never left me stranded. Clean and clear title in my name, 5 speed shifts nice, starts up even in 20 degrees without being plugged in. Its not fast, it tops out at around 55 mph, I suspect the injection pump needs timed. The thing that sets this truck apart is its lack of rust, none on the shock towers, rockers, quarter panel corners, or anywhere you typically see rust. It has one small spot (pictured in picasa) on the underbelly thats the size of a couple pencils. Its been very well preserved through the years and always stored indoors, never driven in snow (or winter really, for that matter). Interior was completely reupholstered before i bought the truck, as well as a complete engine and transmission rebuild by Westside Diesel in Fort Worth, Texas (truck was a Texas truck its whole life), at the same time as the engine rebuild, Westside Diesel rebuilt the brake, suspension, and steering systems, and rewired the truck (see pics of this $2,829 invoice) The stack of paperwork from various Texas diesel shops is huge, totaling well over $5K. It drives really nice, has fantastic little BMW 320i rims on it with newer tires. great little truck, Please ask any and all questions, and see the 113 pictures in my Picasa album!! and be sure to read any captions I wrote with each picture- https://picasaweb.google.com/108592734019829103745/1981VolkswagenRabbitCaddy#

thanks for looking & good luck