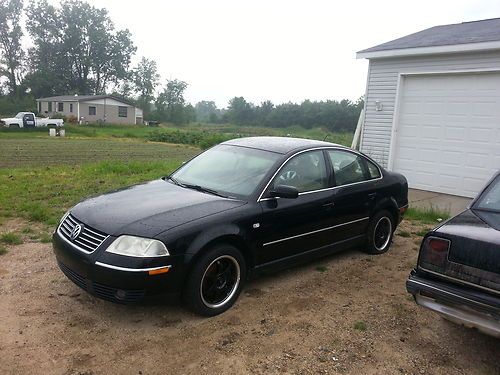 Condition: UsedA vehicle is considered used if it has been registered and issued a title. Used vehicles have had at least one previous owner. The condition of the exterior, interior and engine can vary depending on the vehicle's history. See the seller's listing for full details and description of any imperfections.Seller Notes:"some scratches rear bumper is cracked and front is missing a small piece wvw"

im selling my 2002 passat ive had it for 4 years  also have a spare vw key, only selling to put down payment on a bike and time to move on ran great when parked for the winter now wont start timing is good brand new battery now just makes a click sound like the starter is bad has all options but 4motion and auto has nice 16in motegis and stock wheels also needs tires on both sets has heated leather power everything parts replaced are timing a couple years ago new battery this year few sensors couple years ago clutch 4 years ago has 193k miles nothing for a vdub has the 1.8 turbo  know u are getting a great car for a low price will need to be towed as plate is expired and no insurance item is for sale locally and reserve the right to end early any ?s dont hesitate to ask im sure im forgeting somthing