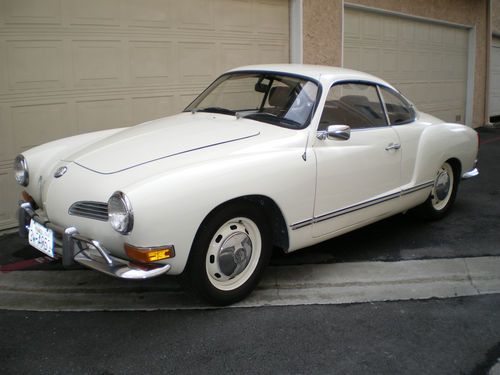 I've owned this Ghia approximately 15 years. I'ts been parked in my garage. I'm 2nd owner. Like me, the first owner only drove it locally. I bought it from the Palm Springs area from the nephew of the first owner.  First owner passed away. He drove it to Lake Arrowhead where I bought it. It has all original emblems, side mouldings, knobs, light covers, engine. Extra parts: tail light covers,owners manual (not original),after market mirror and door handles,fuses,hub caps,car cover.

Body has one ding at left on back lid. Was repainted orginal color 8 years ago. Seat covers and carpet replaced with the Volkswagen Ghia car kit. Wood dash board was replaced. Metal horn handle is split. Every other part of the Ghia is stock.