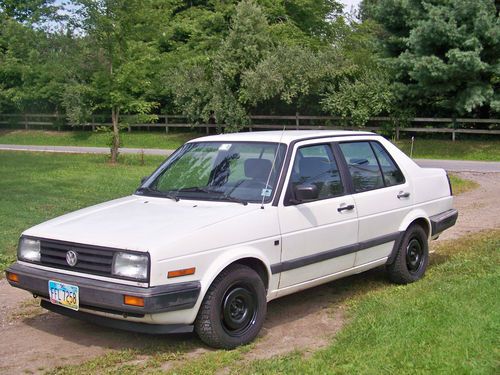 Condition: UsedA vehicle is considered used if it has been registered and issued a title. Used vehicles have had at least one previous owner. The condition of the exterior, interior and engine can vary depending on the vehicle's history. See the seller's listing for full details and description of any imperfections.Seller Notes:"The shifter is very loose, fuel pump drips when engine is running, the temperature gauge is not working."

Solid 1989 Jetta diesel, daily driver. Study the pictures carefully, feel free to contact me with any questions. Come drive it.

The mileage will be higher than the listing shows, I will keep driving it everyday until it's sold.

The body has very little rust, the worst rust being a few odd holes in the trunk wall. I touched up a few rusty spots with primer and OEM spray paint. The overall paint finish is fair. The body is straight, and the front end has been recently rebuilt with new ball joints and tie rods. The door handles are hard to operate, and all doors will open. The keyed cylinder for the trunk is missing, trunk still latches. No key for the doors.

The interior is old, and there are some stains. The cushion is crushed in the driver seat. A few trim pieces are missing or broken, nothing too bad, interior is fair. Brake pads, rotors, and master cylinder less than a year old. 4 new Firestone tires installed last winter, plenty of deep tread on the tires. Turn signal arm does not return.

The engine runs good and strong. New timing belt and water pump were installed at 250,000 miles as a preventative measure. Battery and alternator are less than a year old. I use a 50/50 mix of diesel and waste veggie oil in the same tank, the fuel mix is heated with a heat exchanger under the hood, works fine. The car has passed the Ohio emissions test every time; the emissions are clean, very little or no smoke. I replaced the glow plugs, relay, and block heater a couple years ago, all are still working. The AC system looks complete, but does not blow cold air. The exhaust has a new first pipe, gasket, and clips at the engine, and new pipe back to almost the rear axle. The muffler pipe is rusty, the muffler is not OEM.

The shifter is very loose, and it takes some finesse to go thru the gears, all the gears work. The fuel pump drips when engine is running, and leaves a few drops where the car is parked. The temp. gauge is not working, but the coolant system is full, and the radiator fan cycles. All other indicator lights work.

The Jetta is very solid and runs good. It is 24 years old, has old parts, and is driven daily. Sold AS-AS.

I encourage you inspect and drive the car. I work near Cleveland Ohio. Send me your phone number and I will call you back, or post any questions you have.