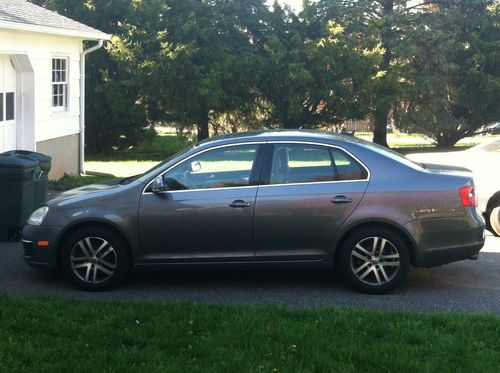 Condition: Used: A vehicle is considered used if it has been registered and issued a title. Used vehicles have had at least one previous owner. The condition of the exterior, interior and engine can vary depending on the vehicle's history. See the seller's listing for full details and description of any imperfections. ...
All scheduled maintenance, Looks & drives great, Mostly highway miles, Non-smoker, One owner, Satellite radio, Title in hand, Well maintained.
For Sale a 2006 Volkswagen Jetta GL 2.5
100% Dealer maintained. Mostly all highway miles. Does have slight exterior cosmetic damage, but very well cared for. Drives great! Would make a great first car, or as a daily commuter. or how about a great gift for that new graduate! Includes 4 newer Michelin tires, also has factory IPod adapter installed in glove box. Includes VW Monster Mats upgrade.
Vehicle sold AS IS, and the Seller explicitly disclaims all warranties, whether expressed or implied, including but not limited to, any warranty as to the condition of the vehicle. However, the Seller's above warranty disclaimer does not, in any way, affect the terms of any applicable warranties from the manufacturer of the vehicle, if any.