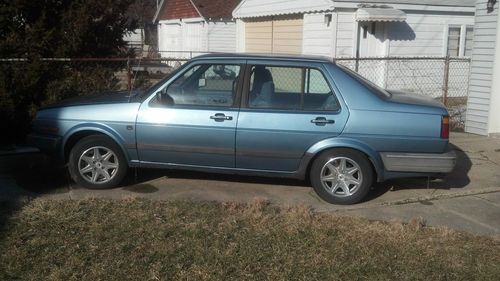 I am selling my 1990 MK2 Diesel Jetta. The engine is not running. I was driving and gradually lost power until the engine stopped. I suspect the head gasket, but I don't have a lot of time to work on cars anymore and bought a new car.

I did a LOT of upgrades to the car and I think the VW community should have a stab at keeping this car on the road.

It has keyless entry, power locks, power windows, Serpentine belt conversion with new alternator, Electronic compass and self-dimming mirror. (If you have ever driven these cars, you know the dimming mirror is a really nice upgrade) The vehicle has a Grease Car conversion. I actually only ran the car on Diesel. I wanted to get into Grease, but never had the time. So since I have had it it has just acted as a second tank. I also put some new Wheels on the car. Aluminum cast wheels. You can see them in the pics.

The interior is blue cloth and had a clarion stereo. I put in a remote located USB connection to the radio, so you also have that capability. The radio has a module you can get for Bluetooth, but I don't have that. But you can upgrade it if you want to.

Here is a video briefly showing the car and it's upgrades.   http://youtu.be/OmjrXhNsf6I

I just want the car to go to a good home. The serpentine belt conversion was 600 bucks, the grease car conversion was between 1200 and 2000 the power mirrors, keyless entry, and power mirror was 600 to 1000, so there is a lot going on here.

I am putting this up with no reserve and I will let the auction run. If it goes for a little or a lot, that's up to you. Just remember it turns over, but is not currently running.

Thanks, I look forward to giving this car a new home. Great car for these tight times. I used to drive it 200 miles a day when I taught at MSU. It's a great car.