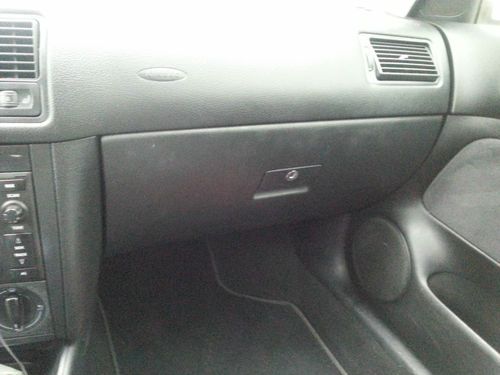 Condition: Used: A vehicle is considered used if it has been registered and issued a title. Used vehicles have had at least one previous owner. The condition of the exterior, interior and engine can vary depending on the vehicle's history. See the seller's listing for full details and description of any imperfections. ...
You are looking at a 2002 VW Golf TDI.  This TDI has a clean CarFax. This TDI has about 151,000 miles on it, which as you know is nothing for a diesel.  These VW diesels can run well into the 300,000 mile range without any major issues.  They are also extremely fuel efficient.  This car runs amazingly well, today I drove it from CT to NH and back.  The trip is about a four hour round trip and there were absolutely no issues.  This car is loaded with options including a sunroof, Ice Cold A/C, Cruise Control, Heated Cloth Seats, Monsoon Stereo, and much more.
This is a used car so there are a few minor issues that could use attention. The flip up center console lid is broken, which is typical for VW's.  The driver side power window does not work.  All other windows including the sunroof work flawlessly.  All other power accessories work well.  There is a pulsate in the brakes, so they will need to be done sooner then later.  The tires are about 50-60%.  There is some staining in the carpet, trunk carpet, and headliner.  The car could use a good cleaning.  Cosmetically the car is in decent shape.  The hood has some small chips from normal daily driving.  The passenger side has a dent/scrape along the rear rocker panel, dog leg, and bottom of the door.  There are two pictures that show the damage very well.  It really isn't that bad and you could probably just leave it.  I do not know whether or not the timing belt has been done, so I would assume it has not.
I am a dealer.  We have a small shop off of exit 1 of route 95 in Ashaway RI.  This is a wholesale piece that I decided to offer to the public do to the amazing condition it is in.  This car is being sold AS-IS.  Because it is a wholesale piece there are no additional fees such as the Doc Fee.  You will also be responsible for registering the car in the state that you live in, paying sales tax in the state you live in, and other fees incurred while registering the car. If you are from out of town and you are flying in to pick it up.  I will be happy to pick you up at the airport, as long as you fly in at a reasonable time.  I would be happy to send you additional pics, I can only guarantee that pictures can be sent during the first 4 days of the listing. I also cannot guarantee that questions asked in the final 2 hours of the listing can be answered.
*** A $500 NON-REFUNDABLE deposit via PayPal is required within 24 hours of the end of the auction.
***  If you choose to pay the balance with a Credit Card a 3% fee will be added to cover the fees.
***A 20 temporary plate is available for a $20.00 fee (exactly what RI charges us for them).  We MUST have have proof of insurance one business day before you pick the car up.
***If you are paying with a bank check you MUST fax or email us a copy of the bank check 2 business (Mon-Fri) days before you pick the vehicle up.