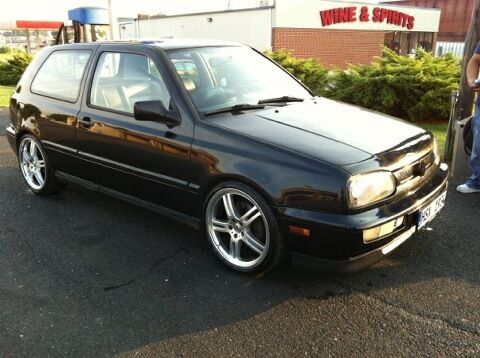 Car runs and drives strong. One of the best VW's out in the market. Alignment was just done before the year started. Car is in good shape despite its a 16 year old car.The car has a ding on the drive side quarter panel nothing big easy fix for those who can do body work. no rust around the car. The drive side front seat has a chunk of the sides.
Car has:
18" x 8 TSW wheels with low profile tires. Also stock rims and tires 5 spokes will be sold with this auction
Drive chain was replace
K&N air filter
New powder Steering unit
Euro front spoiler
Euro head lights with super white bulbs
smoked rear tail lights
Asna 2.5" muffler pioneer CD head radio
The only problem I've had is trying to diagnose the check engine light.
I have replace leaky holes. Replaced crank senor, and spark plugs and wires are new. New high catalytic converter and battery.
All in all the car drives great and has never left me stranded. The car is also being sold locally,I have the right to end the auction at any time. No warranty or refunds. You are more than welcome to contact me for any questions or to see the car locally
I will try to get all picture in before the end of the day.
On Mar-13-13 at 14:28:09 PDT, seller added the following information:

The car has power mirrors. I have the sock ones off at the time and aftermarket side blinking yellow with yellow arrow on the mirrors glass are on. Wiring still needs to be done. Buyer can request to remove them and ill put the stock ones back on. There is a picture with the stock mirrors and with most resent side mirrors.