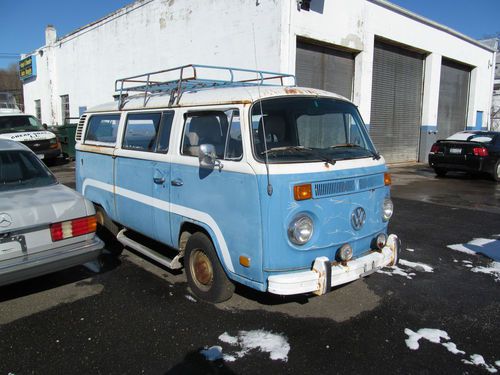 This is a 1975 VW Van/bus /Type 2.  This van is in excellent structural condition. It has no rot or ,major rust anywhere. This is a perfect restoration canidate or get it going the way it is. It has been sitting in a garage for 15 years.I run a VW/Audi/BMW shop  for over 38 years and this is by far one of the best and  unmolested vans I have seen in a long time.If you are a true VW enthusiast you will not be disapointed in this van. It currently does not run,I believe from sitting.I do not know the condition of the engine, it is complete. This van also has a roof rack, Air conditioning and the center seat is still in it.I will let the winning bidder check the van on my lift for as long as he or she needs.If the van is not what you expect, I will give a full refund with no negative feed back.I just expect the same courtesy in return.I want the buyer to completely satisfied with their purchase.This van is being sold in AS IS CONDITION..