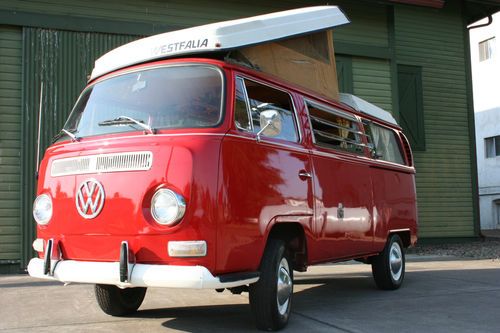 Condition: UsedA vehicle is considered used if it has been registered and issued a title. Used vehicles have had at least one previous owner. The condition of the exterior, interior and engine can vary depending on the vehicle's history. See the seller's listing for full details and description of any imperfections.Seller Notes:"As usual with all antique cars, some parts will have normal wear.Some parts are new some are not.Bus is sold as is no returns."
1970 montana red Westfalia Camper
This is the real deal, Original,  factory made,  german  built Westfalia.
Paint is brand new single with clear coat Montana Red.
Bus run's and drives w/ a nice strong running rebuilt 1600 engine.
This engine is not the oily mess that these can sometimes be.
Brakes and e-break work.
Tires are good.
Brand new starter, brand new Pertronix electronic ignition and a brand new battery. All of these items make for a very nice and easy start.
The bus fires up easily.
All of the doors including the sliding open and close well.
No broken or cracked glass.
I've yet to get around to making all the blinkers work. should be a very quick job.
Bus is what many would call rust free. I would say it has minimal and typical surface rust. Excluding the battery which has typical rust.
Please keep in mind this is a time capsule, an antique and the bus is worn and aged.
there will Always be minor thing's that you can improve on.
Canvas is O.K.
There are little odds and ends that could use tlc...or not.
A 500.00 dollar non-refundable deposit is required at the end of the auction.
I have and will ship cars worldwide.
Questions, call me Justin @ 503-347-8756