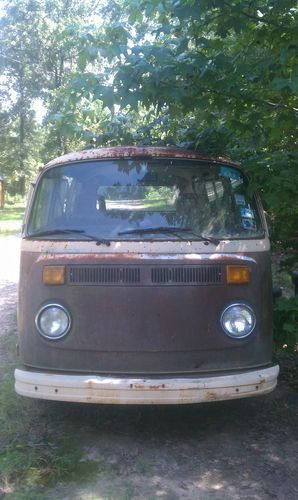 Condition: UsedA vehicle is considered used if it has been registered and issued a title. Used vehicles have had at least one previous owner. The condition of the exterior, interior and engine can vary depending on the vehicle's history. See the seller's listing for full details and description of any imperfections.Seller Notes:"Ran great about 6 years ago. It has been sitting up since then. She will probably need some new tires. There's a wood floor, it's damaged by the sliding door from rain, because of the gap. The sliding door bracket seems to be broke and needs to be replaced to fix that. Some rust and a couple of dings. There's some surface rust, the only rust I see that goes all the way through, is the step up spot, just below the front passenger door opening. The interior is molded on the ceiling and a tear near the front passenger door. The interior side material is coming loose or needs replacement."

For sale by owner. I have the Texas title. Does not have a camper top. Ran great about 6 years ago, drove from Tyler to Andrews in far west Texas, to Dallas, and all around Tyler. Doesn't haul arse, but was fun to drive and we never had any problems with the motor. It has been sitting up and not driven for 6 or so years. My son just got a smaller car because of gas $ and then moved, so nobody has driven or messed with it. For that reason, I'd trailer  it home and replace fluids before tinkering with her to avoid causing any damage. The mileage states 01,057.  It doesn't have the 100,000 number slot.  The guy we bought it from said he rebuilt or replaced the motor.  She will probably need some new tires. It's a 4 cylinder automatic. There's a wood floor, it's damaged by the sliding door from rain, because of the gap. The sliding door bracket seems to be broke and needs to be replaced to fix that and easy enough to find online. The ceiling has some mold and the side material is loose or needs replacement.  Some rust and a couple of dings. There's some surface rust, the only rust I see that goes all the way through, is the step up spot, just below the front passenger door opening.  Please view the pics and ask any questions if you are unsure.  Thanks and good luck!