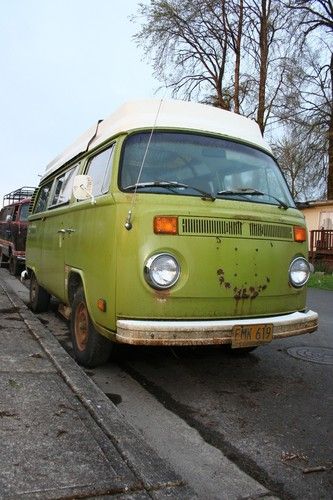 Condition: Used: A vehicle is considered used if it has been registered and issued a title. Used vehicles have had at least one previous owner. The condition of the exterior, interior and engine can vary depending on the vehicle's history. See the seller's listing for full details and description of any imperfections. ...
2 busses 1 auction
Bus 1................1977 riviera camper
Bus 2................RARE 1 year only<1978> Champagne edition
2 busses 1 auction you will get both vehicles,  The camper is a really nice non running project that will make a nice camper.  The top canvas is very nice as is the interior, as you can see the seats have no tears and the dash is in very good shape. The pop top will need nothing but the new black seals.
I have the keys for the bus.  I will include a rear window in the sale of the bus.
This bus is being sold as a non running project.  I have the title.I f you want it transferred in my name that will be at your expense.
The second vehicle is a rare 1 year only champagne edition, Being sold as is, as a  non running project.
As you can see in the photos the OG paint buffed out to a nice shine.
The bus could use a weekend worth of tidying up to make it look real cool.(racks not included)
It looks like part of the paint is a respray on the passenger side, and needs work due to peeling bondo.
This is an obvious non running project.bus has a reconstructed title but shows no sign of a real accident.
engine is there.
I have the keys to the bus.I do have title but transferred to my name will be at buyers expense.
Busses are as is no returns.
I can not store these vehicles and they must be paid for and shipped quickly.
Overseas buyers welcome.
I have shipped many cars and will assist.
Please call with questions 503 347 8756