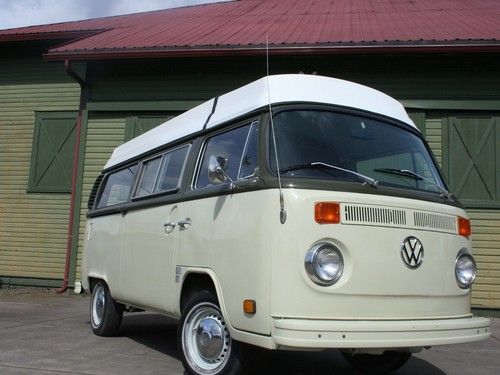 Condition: Used: A vehicle is considered used if it has been registered and issued a title. Used vehicles have had at least one previous owner. The condition of the exterior, interior and engine can vary depending on the vehicle's history. See the seller's listing for full details and description of any imperfections. ...
The Time Traveler
This bus was a real discovery when I found it.This 1973 Riviera camper bus  originally built in Germany was shipped to the united states,then immediately after it's arrival  was shipped to Beaverton,Oregon where it was converted to what is known well as a Riviera camper.
Not only is this bus a true discovery but I would also consider it on the rare side as far as Riviera or any of the coach built campers is concerned.
What makes this so unique are the facts that the design of this bus make's for much comfort,The rear seating area has a full bench seat that folds out as a bed, I know they all have beds but this one is different,instead of having a closet storage area that runs the length of the of the rear bed,that was eliminated and placed behind the driver's area, freeing up a foot or two of sleeping space which can make all the difference in a good nights sleep.
This bus also sports a VERY large bed upstair which will hold 2 adults easily.This is the penthouse,great for all kinds of fun,fantasy and nature viewing.
The condition of the pads for the top bunk are like new, almost as though never used. The condition of the bottom bench seat is very good with no rips,tears,or stains.Another testimony to the overall condition of the vehicle is the fact that the front seat's have no rips or tears,only seam wear.Indicating that great attention and care was given to the overall use of the vehicle.
The Bus Has a brand new paint job which is Palm Green Sand Green an origanal Vw Color from earlier models
Paint is a base coat clear coat.Many hours have gone into making the body straight and shiny although not a show quality finish it only shows minor imperfections.
The bus has many new parts,including a windshield,a new windshield seal,brand new pop top seals all the way around,a new fuel pump and more.
I do have original documentation of maintenance,along with that I found receipts for an engine install and a transmission install.
Bus starts easily and runs great,I have yet to find a drop of oil under it.Brakes and E-brake work,although I would insist on having them gone through.
Wipers, Lights and most of the blinkers are in working order.Both doors open and close wonderfully.
Bus has a working tachometer.
& HEATER WORKS.
Bus is equipped with a working stove,untested refrigerator,a sink with a hand pump,and Electrical outlets for camping
This bus is loaded.
Please note this is an authentic antique vehicle that shows its age in normal areas.
I have and will ship worldwide===No Problem Mate
I do require a 500 dollar non refundable deposit at the close of the auction thru pay pal
Any Questions:
Call me 503=347=8756... Justin
.