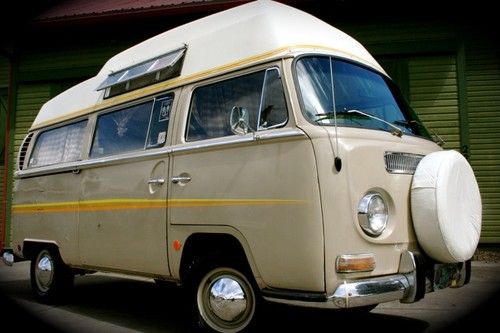 Condition: Used: A vehicle is considered used if it has been registered and issued a title. Used vehicles have had at least one previous owner. The condition of the exterior, interior and engine can vary depending on the vehicle's history. See the seller's listing for full details and description of any imperfections. ...
The Hookah Lounge
One of the most utilitarian conversions ever built on a VW bus. This camper is a 1969 VW Adventurewagen.
This is not your average VW camper. The pros of owning an Adventurewagen far outweigh most of all the other campers.
A few of the most significant benefits would be: the ample amounts of storage, the open floor plan, and plainly and simply this bus looks great. It's a true time capsule.
My best guess would be that this bus has undergone an early eighties restoration and has been repainted the original VW color, Savannna Beige. We opted to leave this bus in it's original "as is" found condition making only a few changes.
The greatest touch to this bus is the custom built hookah lounge area.
Hand built by a local master wood craftsman, the lounge features a very spacious wrap around seating area which serves not only as a lounge area but also as a very large bed. The cushion alone cost over $$500$$.
This bus is running and driving and ready to be used now. I've used the bus recently for local venues and
it runs well and operates as a VW bus should.
The bus shows a very long list of receipts which tell me the bus was well maintained.
It received a new transmission, generator, many small maintenance parts, several valve jobs.
etc. etc.
The bus has a brand new windshield and seal. The tires are very good 8 ply Les Schwab with paperwork.
These tires are correct for the bus and actually fairly valuable.
That being said this bus is an antique and shows normal wear and tear.
This is a nearly 45 year old vehicle. Pride of ownership requires normal and frequent maintenance.
A  500 dollar non refundable deposit is required at the end of the auction
Overseas buyers welcome.
I have shipped many vehicles worldwide and will gladly assist in shipping.
Any questions please call me  JUSTIN @ 503-347-8756
or E-mail  maddriverman@hotmail.com