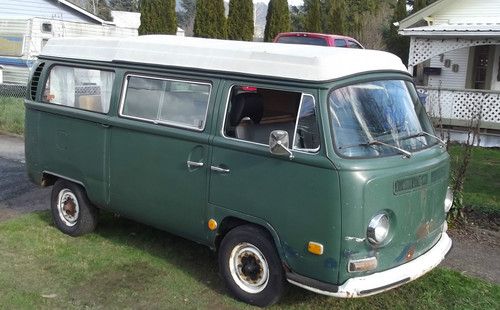 Condition: Used: A vehicle is considered used if it has been registered and issued a title. Used vehicles have had at least one previous owner. The condition of the exterior, interior and engine can vary depending on the vehicle's history. See the seller's listing for full details and description of any imperfections. ...
ANOTHER BUS FOR SALE BY WEST COAST SAMBA
***additional pictures and info can be seen on my web-site***
WESTCOASTSAMBA . ORG
***This bus has a low reserve***
1969 Westfalia Campmobile. This is one of the most unique and rare optioned bay window Westfalias I have seen. This is a super rare full bench seat model Westfalia camper. This bus was originaly sold in Hamburg, Germany. Here is a list of the rare factory options: very rare delta green color, instrument panel in miles not km, ordered with a cab divider, factory prepared for campmobile interior. I have never seen a bench seat model Westfalia.
Interior- The camping interior is equaly as rare. I have never seen this interior lay out in any Westfalia (very rare). All mustard yellow cushions are in excellent condition with only one small rip on fold down bench fabric. The propane tank for the stove is in good condition. All laminate is in good condition. Over all the camping interior is in great condition as seen in the pictures. Front seat has a couple rips and rubber mat is in great condition. Dash is in good condition with one small crack. Rare factory clock.
Body- Cargo floors are solid, cargo door is solid, front doors are solid, battery trays are solid, and the rear corners have no rust. There is some rust on the doglegs, rockers, and a spot on the lower nose. Other than that this bus is solid. This is a solid foundation for a restoration on a very rare bus.
Engine- This bus does not run. The motor is out of the bus but included in the sale. New starter, battery, and axle shafts. Every thing else seems to be in good working order. Put a motor in it and it's ready to go camping.
This is a very rare and unique Westfalia. I have been restoring V.W.s for years and have never seen a Westfalia with this many rare options. Truly a one of a kind bus.
***More V.W.s Can Be Seen On My Web Site***
WESTCOASTSAMBA . ORG
(360)636-7023
Below is the decoded M-Code
On Feb-09-13 at 12:16:34 PST, seller added the following information:
I have received several emails commenting on the rarity of this Westfalia. This could possibly be the only one in existence with these unique options. This Westfalia could be a 1 of 1. Hard to say as this is the only one I know of. This is your chance to own one of the rarest Westfalias ever built. Fully restored, this van could be worth tens of thousands. This bus is undoubtably a rare piece of Volkswagen History.